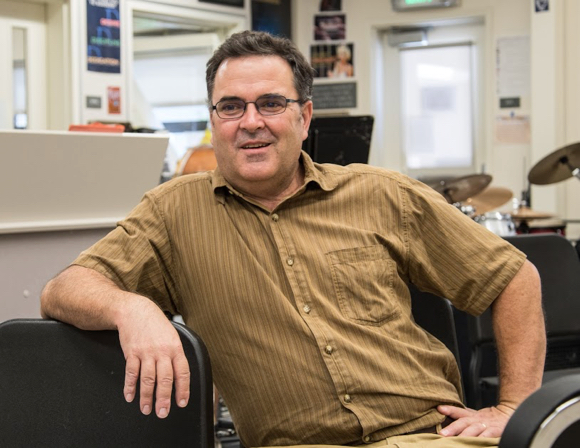 Occasionally someone we interview has roots that are deeply local.

Such was the case when we stopped by Hillview Middle School to interview music teacher Richard Vaughn. We’d learned that he was going to be in the cast of Annie, the next production of the Woodside Community Theater. That was reason enough to catch up with him. 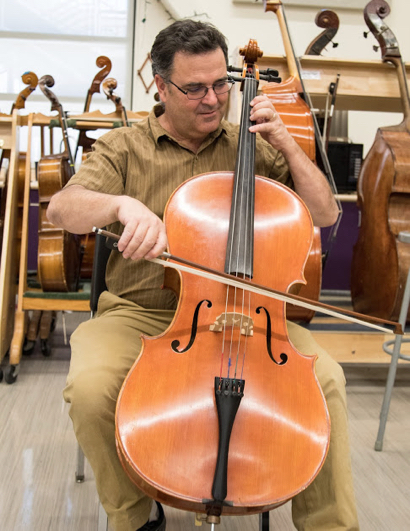 Richard grew up in Portola Valley and graduated from Menlo School. It was at the Community Theater that he met his wife. They married at Woodside Elementary School where they served carrot cake to the 500 people assembled.

While Richard has been the music teacher at Hillview for the past 17 years, his musical roots go much further back. He started playing violin in kindergarten, switching to cello in  fourth grade.

His first teaching job was at Woodside Elementary in 1991. “George Sellman [Superintendent of Woodside Schools] was still alive then,” he recalled. “The Sellman Auditorium is named for him. I got involved in community theater productions during that period but stopped for a number of years after he died.”

When Woodside High School’s new theater debuted, Richard got re-engaged and has been involved in the last eight of 12 productions that the Woodside Community Theater has presented there.

“I tend to be more an ensemble member because I’m a cruddy dancer,” he said. In Annie he plays Howe, a confidant of FDR .

“What people ask me is ‘Will there be live dogs?'” he said. “I assure them we will have four of them.”

Given his string instrument background, it’s not surprising that he picks “the fiddler” in Fiddler on the Roof, when asked about his favorite role in community theater. “That put me on the stage a lot,” he said.

The Woodside Community Theater does just one show a year. But it’s quality not quantity from Richard’s viewpoint.

“Bringing these great works alive — musicals that have been on Broadway — is a joy for the performers,” he said. “It’s a  group effort to pull something together creatively and artistically.”

Tickets for Annie, which opens on October 20 and plays through October 29,  can be purchased online.