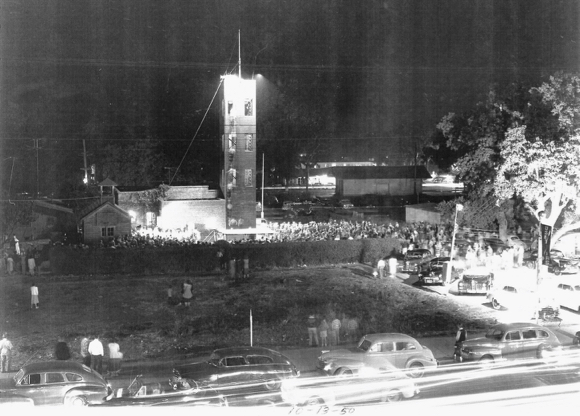 A fire fighting demonstration held at night returns for the first time in 16 years on Friday, October 27, to cap off the Menlo Park Fire Protection District’s 100-year anniversary. 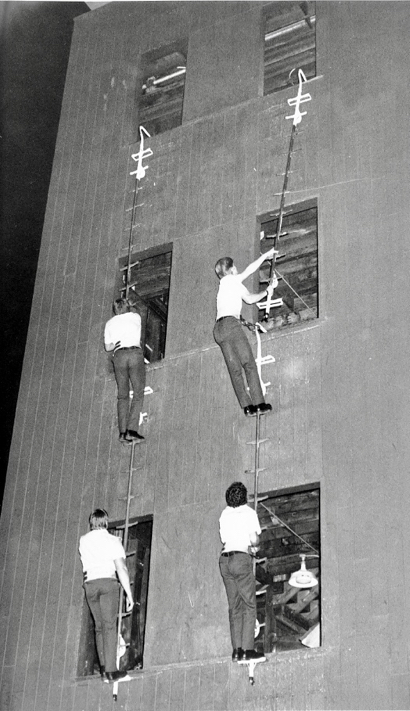 The event will take place at the District headquarters, 300 Middlefield Road, from 6:30 to 8:30 pm. There will be rope rappelling, a movie with a short history of the district, a “rescue” from one of the towers as well as vintage and current equipment in display.

The annual Fire District “night drill” dates back to the 1930’s but is best captured in the photograph (top) from the 1950’s when Menlo Park Fire Station 1 was located on Merrill Street, where the Menlo Center Building now sits at 1010 El Camino Real, the current home of Keplers Book Store and Café Borrone.

The annual night show was one of the highlights of the year for the entire community, remembered well by this writer. If you do, too, please post a comment!

“In the 1981 photo (right, above) that’s me on the top right,” emailed Chief Harold Schapelhouman,” I met my future wife at the annual show that night. We found out that we grew up on opposite sides of an apricot orchard — small world. I was 20-years-old in this picture and had just been hired in June of 1981. I was so grateful for the job and opportunity to make a difference and do something I loved. Still do and happy to bring this show back!”

I remember going to those every year as a kid, I loved the repelling demonstration but my favorite was the Disney short with Goofy. Lots of great memories of those events, glad to see them back. I hope it is back to stay.