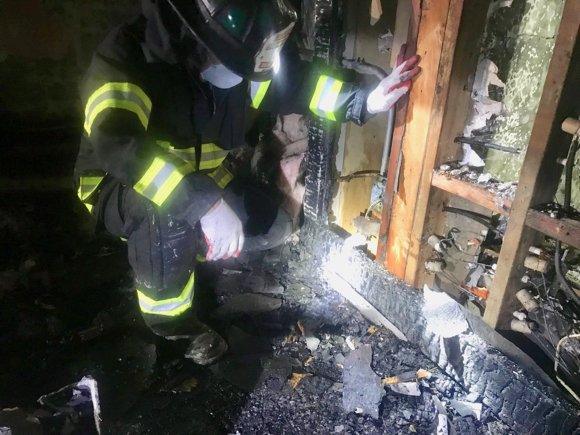 Firefighters made an aggressive attack on the fire and reported that it had extended into the homes entry way, a bedroom and was spreading into vegetation next to the carport. Battalion Chief Dan Coyle requested a full first alarm structure fire response, which added Menlo Engine 1 and Woodside’s Engine 7 and Battalion Chief.

In total, 21 personnel responding on 8 emergency pieces of fire equipment from two fire agencies responded to the fire. Chief Coyle took over as the incident commander and focused their efforts on extinguishing the carport fire, limiting and stopping the spread of fire inside the building and containing the vegetation fire before it could spread and extend into heavier vegetation that could create additional challenges.

The male resident of the home and his dog had fled from the structure but for some reason he had re-entered the building, becoming overwhelmed by the smoke. An AMR ambulance was requested, and he was transported to Stanford Hospital and Trauma Center.

Assistant Fire Marshal Bob Blach determined that the origin of the fire was in the empty carport, but the cause is still under investigation. He reported that the home’s bedroom, entry and carport were damaged by fire along with smoke damage to another bedroom, kitchen and the living room.

“We understand the family dog alerted the occupant before the alarm sounded and we hope he is doing better after inhaling toxic smoke,” said Fire Chief Harold Fire Chief Schapelhouman. “Firefighters did a good job of stopping the fire spread inside the building and outside into vegetation that could have easily spread and become its own problem.”

Photo courtesy of Menlo Fire: Assistant Fire Marshal Bob Blach inspects an electrical power outlet and wiring looking for the cause of an early morning fire in Atherton