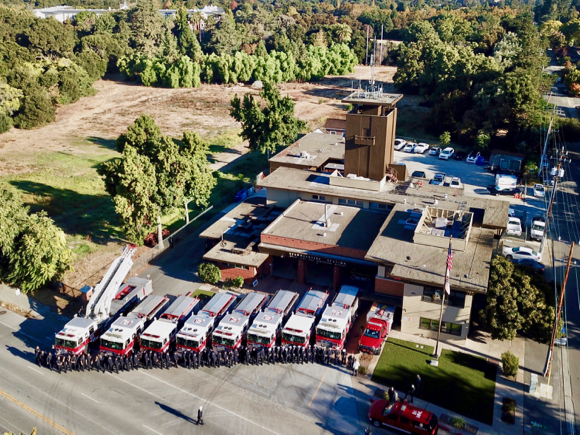 Fire fighters and district officials of the Menlo Park Fire Protection District gathered this morning for an official 100th anniversary portrait, seen above from a drone perspective.

Emails Jim Lewis of the Menlo Park Historical Association: “The Fire District took a similar photo for their 75th year anniversary and again at their 90th. They are on display on the wall in several of their fire stations. 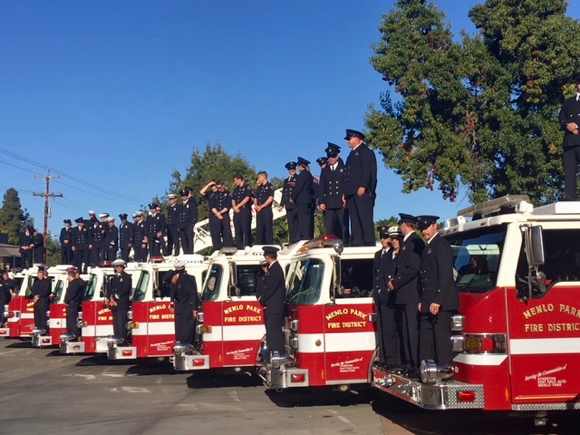 “The prior photos had the fire fighters standing on top of the fire trucks, too, so this is in keeping with that tradition.

“Overall it is an impressive photo, with approximately 93 firefighters, plus the five member Board of Directors and some staff members. Some folks are out of town and not included.”

Adds Fire Chief Harold Schapelhouman:  “Palo Alto, Redwood City and Woodside Fire covered some of our fire stations which allowed this confluence of emergency equipment from all seven stations to happen.

“Fortunately, no calls for service were received during the photo shoot with a professional photographer. Menlo PD occasional blocked Middlefield Road so a series of pictures could be taken and then it was reopened again.”