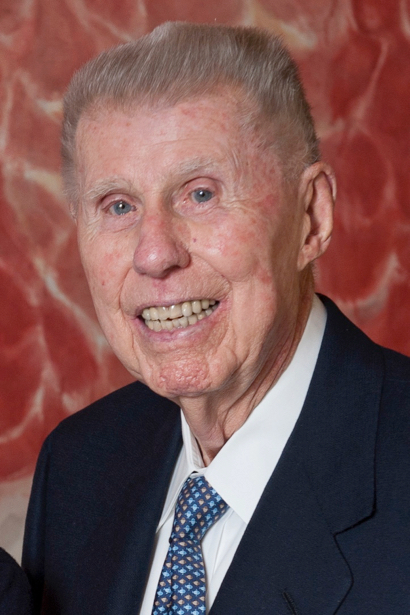 Philanthropist and art collector Harry W. “Hunk” Anderson died on Feb. 7 at his Atherton home surrounded by his family. He was 95.

Anderson was the founder of food services company, Saga Corporation,  and with his wife, Mary Margaret “Moo,” and daughter, Mary Patricia “Putter,” a devoted art collector.

In 2011, Stanford University announced that it would become home to the core of the Anderson Collection, one of the most outstanding private collections of 20th-century American art in the world. The collection of 121 works by 86 artists housed in an award-winning building designed by Ennead Architects in Stanford’s arts district opened to the public in 2014.

In 1975 the Andersons started a graduate internship program for Stanford doctoral art history students that continues today. More than 30 doctoral candidates at Stanford interned at the Anderson Collection, engaging in intensive study and organizing exhibitions drawn from the collection.

The family’s first gift of art to Stanford was made with other donors in 1993 when they funded the completion of Stanford Wall (1980) by Josef Albers, currently installed near Littlefield Center. Albers donated the design for the sculpture in 1973, but the sculpture was not fully realized and installed until after his death.

“Hunk Anderson had an infectious enthusiasm and passion for art, and for sharing art to benefit society broadly,” said Stanford President Emeritus John Hennessy. “He just lit up whenever he described what each work meant, and how it inspired creativity. It was this shared passion that bonded us, as we met through our mutual interest in visual arts. Hunk’s insistence that the family’s remarkable collection go to a place that would curate it in perpetuity, so that it could be used, shared and seen, reflected his philosophy that art can and should inspire all of us. All of us at Stanford will always have the deepest affection for Hunk as a generous, big-hearted man.” 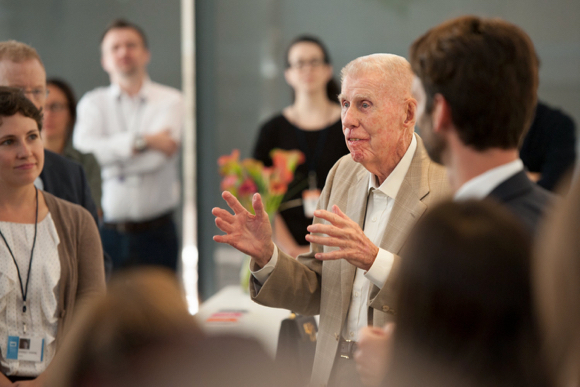 Harry W. Anderson was born in Corning, New York. His father and mother immigrated to the United States from Sweden and Norway, respectively. After serving in the U.S. Army during World War II, he attended Hobart College in Geneva, New York, where, during his junior year, he co-founded the food service company Saga to manage the college’s cafeteria. After he and Moo married in 1950, they moved around the country to establish Saga at other colleges. In 1962, three years after the birth of their daughter, Mary Patricia “Putter,” they moved to the Bay Area and opened the national headquarters for Saga in Menlo Park.

The Andersons began collecting art in the mid-1960s after a trip to the Louvre in Paris, where they admired works of the French Impressionists. They initially collected work by Early Modernists, such as Pablo Picasso and Henri Matisse, the German Expressionists, such as Emile Nolde, and the Early American Modernists, such as Georgia O’Keeffe, Marsden Hartley and Arthur Dove. By 1969, however, the Andersons made the decision to concentrate exclusively on postwar American art.

A large part of the Andersons’ collecting philosophy rests upon their equal beliefs in the head and the hands – meaning that they look for ingenuity as well as masterful craftsmanship in the art they collect.

The core of their collection that is now the Anderson Collection at Stanford University ranges from works by Willem de Kooning to Joan Mitchell, Jackson Pollock to Wayne Thiebaud. The collection is anchored in the work of the New York School and incorporates key modern and contemporary artists, collected in depth and across media.

The Andersons considered themselves custodians and not owners of the art in their collection, and the generous gift to Stanford was made with the purpose of sharing their important and expansive collection with the world. For all the enjoyment Hunk and Moo Anderson took in building an art collection, they seemed equally pleased to give it away. 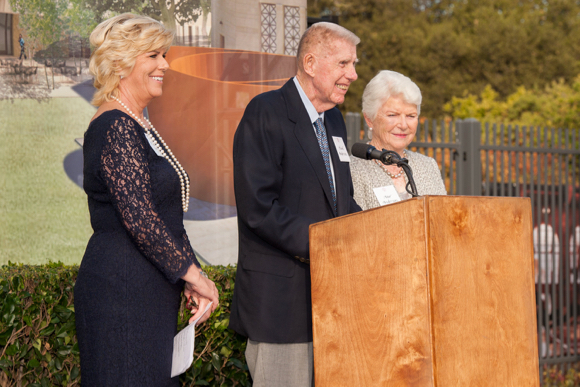 Upon taking the lectern at the groundbreaking ceremony for the building (photo above) that would become the home for his family’s most prized possessions, a visibly delighted Anderson, standing between Moo and Putter, triumphantly declared to the university community, “First down, Stanford!” He went on to share his hope that the new museum would be a stopping place for people to enjoy the ideas of visual expression.

The family plans to have a private burial but looks forward to hosting a celebration of Hunk’s life in the spring.