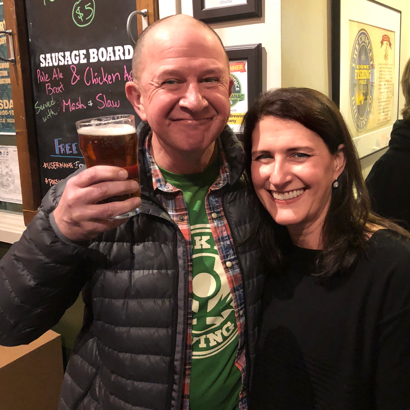 Good vibes aplenty were on display at Freewheel Brewing Company last night when the community came out in memory of founder Malcolm McGinnis on the occasion of the pub’s 5th anniversary.

Malcolm, who passed away in September 2016, founded Freewheel with Englishman Pete Krausa (pictured right with Irene Searles, Malcolm’s widow) along with fellow Menlo Park residents Gary Waymire and Larry Bucka. The three Menlo dads got to know each other watching their sons play lacrosse; Malcolm worked with Pete at a biotech startup.

Proceeds from the sale of bottles of Gone Fishing pale ale last night are being donated to the Ravenswood Education Foundation in support of STEM programs.