Pedestrians, cyclists and motorists: Know what these street markings mean for a safer Menlo Park 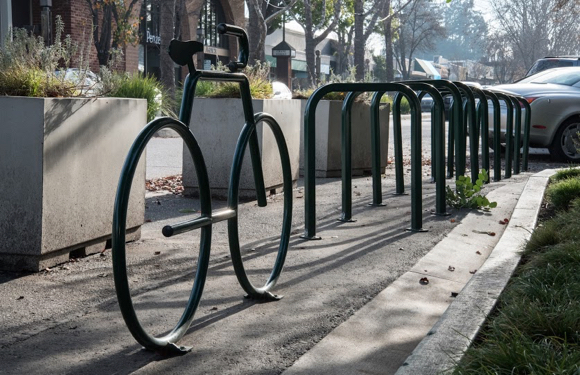 When we caught up with Jen Wolosin, who leads the Parents for Safe Routes project, our conversation turned to the various street markings pedestrians, cyclists and motorists encounter as they make their way across Menlo Park and neighboring communities. 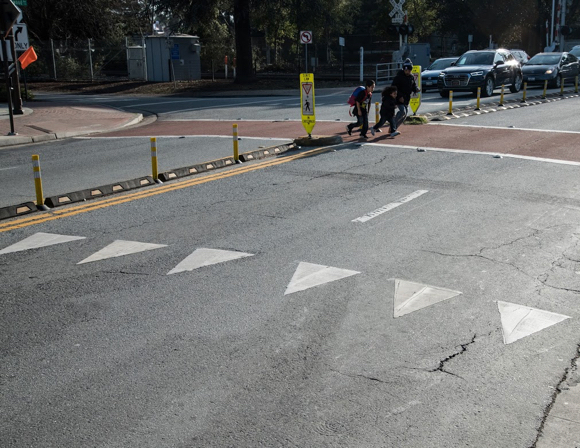 We live near a school so thought we understood the meaning of most markings. We were nonetheless surprised at what we didn’t know. For example, sure we knew that motorists and cyclists are to stop for pedestrians in a crosswalk, but we didn’t know that if that crosswalk had triangles that resemble sharks’ teeth, they are to stop behind the teeth (not between the teeth and the crosswalk line).

Here’s a quick tutorial on the street markings found in Menlo Park. Thanks to photographer Robb Most for capturing the various examples. 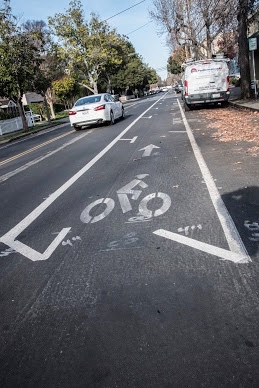 Door zones are one of the newest markings to appear in downtown Menlo Park. The zone is simply the measured space of an open door of a car parked at a curb. It’s a signal for drivers and cyclists to beware, although the law is clearly on the side of the cyclist.

California Vehicle Code Section 22517 reads: “No person shall open the door of a vehicle on the side available to moving traffic unless it is reasonably safe to do so and can be done without interfering with the movement of such traffic, nor shall any person leave a door open on the side of a vehicle available to moving traffic for a period of time longer than necessary to load or unload passengers.”

Drivers opening their car doors before looking for cyclists in the roadway or bike lane is one of the most common forms of bike-car collisions, often resulting in serious injury or worse (bicyclists sometimes refer to it as “getting doored”). Conscientious motorists are urged to open the driver door with their right hand, the so-called Dutch Reach, which requires them to look behind them in the process. 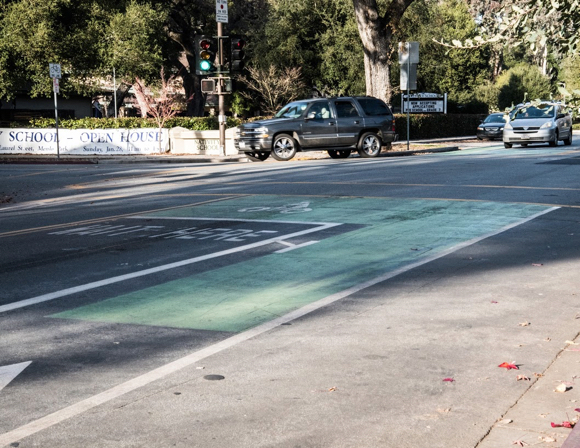 Another new marking is a bike box (above). It’s a designated area at the head of a traffic lane at a signalized intersection that provides bicyclists with a safe and visible way to get ahead of queuing traffic during the red signal phase. Benefits include increased visibility for cyclists and helps prevent “right-hook” conflicts with turning vehicles at the start of the green area. 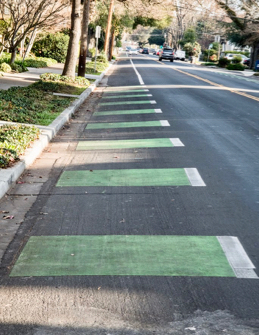 Like neighboring Palo Alto, Menlo Park is starting to see more green bicycle only lanes. Motorists can drive over bike lanes to access parking or make a turn. A dashed rather than solid green, signifies that it’s a merge zone which drivers can enter to make a turn. For safety, motorists should signal before entering the merge zone and yield to bicyclists already in the bike lane.

In the case of a street with no bike lanes, sharrows (below) are often employed. The meaning is simple: Cyclists and motorists need to share the road. They’re used especially on routes to and from schools, reminding motorists to keep an eye out for kids on bikes. 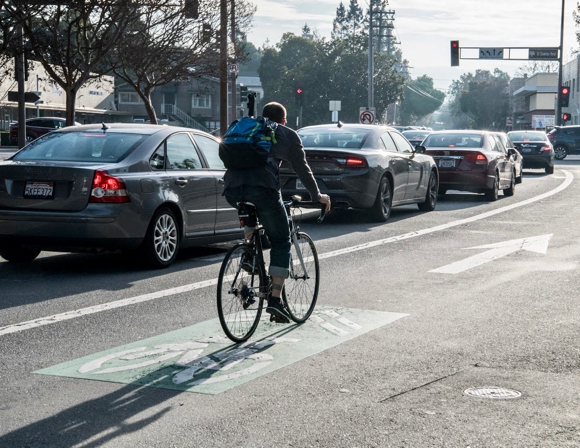 I think the biggest question that arises and always stimulates a lively discussion is this:

California vehicle code requires drivers to safely merge into the bike lane before turning right. This is the same merge maneuver as when you are entering a freeway. Turn on your blinker, wait for a gap in traffic, then move into the bike lane, before you make your right turn. City engineers should create a right turn pocket to the right of the bike lane so the merge requirement is obvious.

This discussion has been had a million times. My point is that drivers and bike riders do not agree on the what the markings mean for right turns by cars across a bike lane. Many people think what you said is correct, many don’t. The markings, sometime dashed and sometimes solid or even double-solid, suggest that drivers should not always merge into the bike lane. Otherwise, why have different markings? (I have pictures of various markings but cannot attach them here.) I think most people want to follow the rules but that is impossible if drivers and bike riders don’t agree on what the rules are.

Thanks for the article, however I have to say I think most of these markings are confusing and distracting at the best of times. Are they legal per the California Vehicle Code CVC ? I always drive defensively and especially near cyclists however I think some (usually younger ones) cyclists could improve their behavior a little also especially by
(a) not riding with free hands ! ie hands outstretched !
(b) cycling with the flow of traffic
(c) putting down the phone and not texting while cycling
(d) obeying traffic lights and stop signs (they protect pedestrians you know)
(e) cycling no more than 2 abreast and preferably single file on busy streets.
(f) no wearing all black clothes at night and lighting up. Yellow jackets/vests would be nice.
(g) walking your bike when in a cross walk, not just launching yourself into it while riding and expecting motorists to stop on a dime for you, potentially causing a rear end collision while you cycle off into oblivion .. (Yes, I’ve seen this happen).

Thanks and be safe out there.

The sharrow photo shows how they are supposed to be used, but the text does not. Bicyclists are supposed to ride where the sharrows are, which is usually in the center of the lane. Do not ride in the gutter to the right of the sharrow, since cars will assume you are turning right. California’s 3-foot-passing law also applies to sharrows. Cars who want to pass must pass by at least 3 feet, even if that means using the lane to the left (when safe and legal).