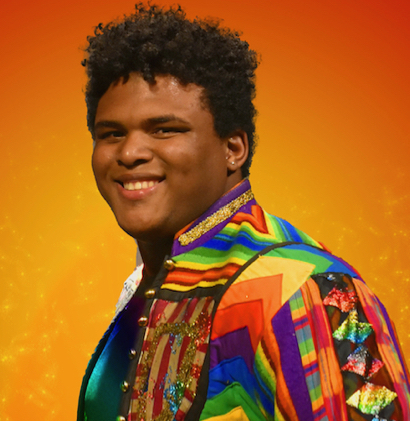 Wesley Barker-Mouton burst onto the scene at Menlo-Atherton in a big way this year, playing football, being involved with the Environmental Club, and now starring in the spring musical, Joseph and the Amazing Technicolor Coat, opening on Friday, March 16, with performances this weekend and next.

It’s not surprising, given his leadership genes. The senior, who transfered from Eastside College Prep, is the grandson of Barbara Mouton, the first mayor of East Palo Alto and a community activist for 40 years. Like his grandmother, Wesley seems born to lead with activities ranging from conservation to choir, along with volunteering at a local senior center.

Wesley is thrilled with the opportunity to play Joseph; he says he’s been singing songs from the musical well before he was cast in the role. Asked to name a role model and then the role he’d most want to play, he replies: “I really look up to Leslie Odom, Jr. He’s an amazing actor that takes on a role with such passion.”

As for that dream role: “No question it would be Simba in the Lion King. If I could play him, my life would be complete!”

Wesley’s exemplary achievements have been noted. He has won the Rotary Youth Leadership Award, Scholastic Achievements Award, and was a speaker at the 31st Scholastic Achievements Award ceremony. An avid outdoorsman, Wesley is a volunteer planter in the Student Conservation Association, a Student Advisor for Outward Bound, and a graduate of the National Outdoor Leadership School (NOLS) in Casper, Wyoming, where he became a certified Wilderness First Aid Responder.

He also directs the youth choir at Calvary Temple Church and volunteers at the Palo Alto Senior Citizens Center. Wesley loves to perform and sing, and is interested in a career in computer science and digital film and media.

He’s very glad to be at M-A for his senior year, which he says, gives him a “total high school experience.” But even with all his school and extra-curricular activities, his love for the outdoors is paramount. “It’s the one place we can truly be ourselves,” he says, “where we can learn how to live with less and are forces to see how simple life can be.”

The family-friendly Joseph and the Amazing Technicolor Coat will be performed March 16-18 and March 23-25 at the Menlo-Atherton Performing Arts Center. Friday and Saturday performances are at 7:30 pm; Sundays at 2:00 pm.   Based upon the story of Joseph, this Tony Award Best Musical nominee was written by Andrew Lloyd Webber and Tim Rice.

In addition to M-A drama students, students from Encinal School are also in the production. Tickets can be purchased online or at the door.