Three people called 911 on Wednesday shortly before noon, reporting that they felt sick after breaking into a locked cabinet inside a second floor apartment. They had been cleaning a one-bedroom apartment of an evicted tenant at a public/private transitional housing project located at 605 Willow Road in Menlo Park at the Veterans Administration (VA) which assists homeless veterans, also known as Willow Housing.

The prior tenant had been evicted the week before, and the three immediately left the apartment once they smelled what they described as chemicals, fearing it could be related to some type of drug lab.

Menlo Fire Engine One and Battalion One treated the three victims, who were feeling much better after exiting the apartment. Battalion Chief Tom Calvert determined from the three workers that they suspected that they could be dealing with some type of suspected potential methamphetamine problem or operation. 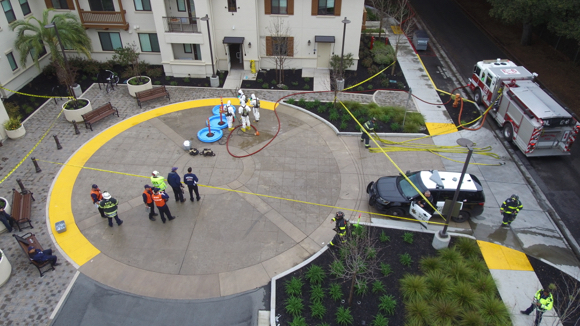 Battalion Chief Calvert assisted by Fire Marshal Jon Johnston and Emergency Specialist Michael Ralston, members of the Fire District’s UAS/Drone Team, determined the they could fly one of the Fire Districts DJI Drone Platforms into the apartment unit in advance of the Hazardous Materials Team.

Using a smaller DJI Mavic Pro Drone, equipped with a 4k camera and propeller guards for interior building use, the Menlo Drone Team quickly deployed the platform only to have it malfunction shearing off all of the propellers and guards.

The Drone Team quickly replaced the propellers with spares and decided to fly it into the apartment without the protective guards, which would have allowed it to safely bounce off of walls and objects. They then very carefully flew the Drone through the narrow doorway, avoiding walls, counters and other objects, eventually parking the unit on a couch for  retrieval.

The Menlo Drone Team was able to quickly brief the Hazardous Materials Response Team upon their arrival. The Menlo Drone Team deployed a larger DJI Inspire Drone Platform to survey and document the exterior operations by flying about 75 feet over the incident.

Ultimately, nothing was found but Team Members suspect that cleaning products may have unknowingly been mixed together in waste bags to create a noxious chemical smell. The incident was downgraded, the complex deemed safe and the last unit cleared the scene at 4.36 pm.