In homage to the many March for Our Lives events happening around the country today, around 200 kids from nine to 92 joined together for a walk along Santa Cruz Avenue early Saturday afternoon in support of stronger gun laws.

Billed “Walk for Our Lives,” it was organized by Menlo Park mom (three children in Menlo Park schools) and gallery owner Katharina Powers (pictured with armful of flags, below) and led by Lin Evola (in black, photo top) who began the Peace Angel Project in 1992 and will soon construct a Silicon Valley Peace Monument. “It’s a conceptual art project that I started in protest to the epidemic of gun violence in this country,” Lin said. “For me, it was ‘no more’ and my attempt to build something big enough [to stick].” 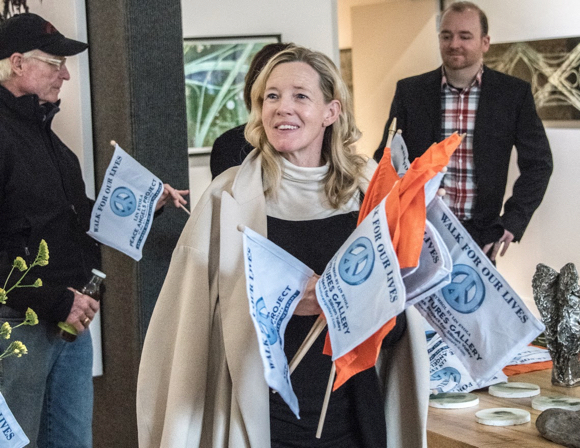 Lin described the monument, whose location is under discussion, as “a transparent globe with a Peace Sign within it and the only kinetic of the Peace Angels Project monuments. “The metal implemented is primarily decommissioned nuclear stainless steel,” she said. “Land mines, guns, etc. that are used in the monument have to be stainless steel to stay silver in look and reflective in surface.

“The Labyrinth underneath the monument is 100% gun metal which will corrode in dark colors, change hues and even decompose over time. The Labyrinth will be the narrative that tells the story of Silicon Valley and the future.” 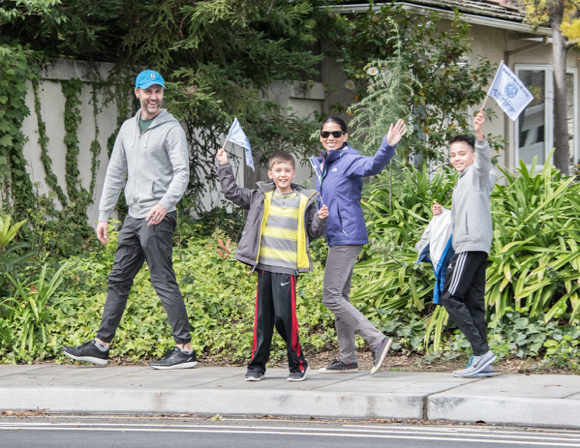 Menlo Park City Councilman Ray Mueller participated as a resident and father. “The way to make change,” he said, ” is to talk neighbor to neighbor.”

Before setting off on the walk, Katharina recalled her experience living in West Germany as a teenager. There she heard pop star Michael Jackson perform The Wall at the Berlin Wall. “The kids on the other side of the wall could hear him but couldn’t see him,” she said. “That served as my impetus to get the wall down. Every Monday we’d protest and finally it came down.” 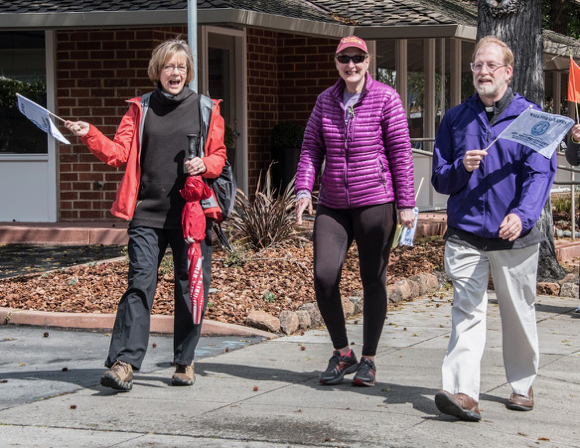 About a dozen people from Trinity Church in Menlo Park were among those who walked. “I decided to walk today, and invited people from our church to participate, because I am very worried about the culture of violence in our country,” said the Reverend Matthew Dutton-Gillett, pictured above with two parishioners. “When children from preschool on up through high school are being drilled on what to do when a gunman enters their schools, we have a public health problem. When a society is unable or unwilling to protect its own children, it has lost its way. The relationship our society has with violence has become a moral issue.”

Menlo Park resident Mike Laine, who participated in today’s walk, had a novel idea for affecting change within the NRA that gained traction as he repeated it to fellow walkers:

“If everyone who participated in a march around the country joined the NRA, there would be enough numbers to change the focus of that organization back to what it was for most of its history — promoting gun safety and education among sportsmen and hunters.” 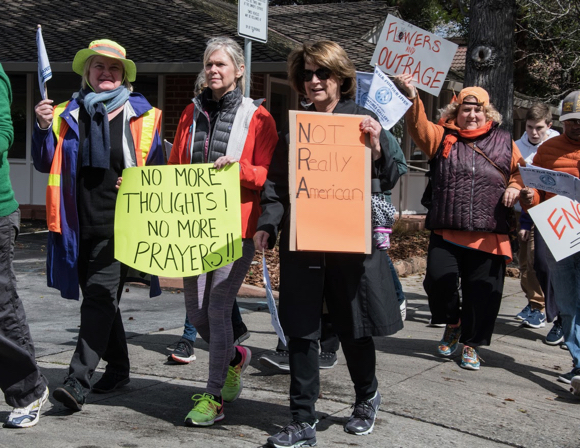 Indeed a quick perusal of the NRA’s Wikipedia entry reveals some historical facts about the organization that few people probably know: “Karl Frederick, NRA President in 1934, during congressional NFA hearings testified “I have never believed in the general practice of carrying weapons. I seldom carry one. … I do not believe in the general promiscuous toting of guns. I think it should be sharply restricted and only under licenses…The NRA supported the NFA [National Firearms Act] along with the Gun Control Act of 1968 (GCA), which together created a system to federally license gun dealers and established restrictions on particular categories and classes of firearms.”

Mike’s suggestion could provide real traction for gun reform given the fact that March for Our Lives organizers estimate 800 marches took place around the world Friday and Saturday.

While many people brought their own signs to the Menlo Park event, Katharina supplied marchers with flags that participants waved along the way, often in thanks for the supportive honks and thumbs up from passing motorists.