Secretary of Energy Rick Perry visited the U.S. Department of Energy’s SLAC National Accelerator Laboratory in Menlo Park on Wednesday, where he toured the site of a superconducting upgrade to the accelerator that powers the lab’s X-ray laser and met with employees in a town hall meeting.

“We enjoyed the opportunity to share with the Secretary some of our advanced scientific facilities and programs, current and future,” said SLAC Director Chi-Chang Kao, “and to hear from him about the importance of our work to the Department of Energy and the country.”

The Secretary peered down the 567-foot-long “undulator hall” where accelerated electrons are bounced through thousands of special magnets to generate powerful X-rays for experiments at the lab’s Linac Coherent Light Source (LCLS), the world’s first hard X-ray free-electron laser. 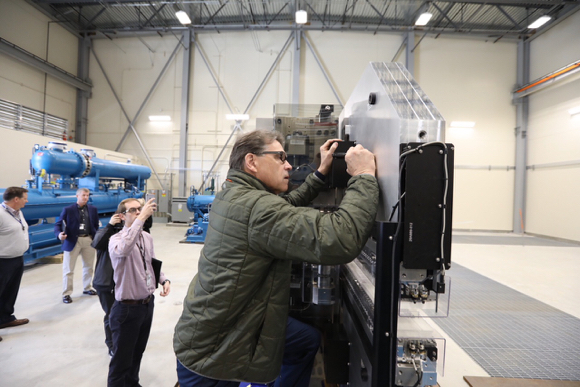 Secretary Perry then spoke with scientists at the X-ray Pump Probe experimental instrument where those X-rays are used to take snapshots of atoms and molecules at work in nanoscale objects, such as proteins, viruses and materials with special properties for future energy or manufacturing applications. There, the Secretary tried his hand at aligning an X-ray camera by manipulating a precision robotic arm.

LCLS is a DOE Office of Science user facility. Construction began in 2016 on an upgrade called LCLS-II, scheduled to open for experiments in 2020.

In his remarks during the town hall meeting, Secretary Perry emphasized the importance of the national laboratories in keeping America at the cutting edge of scientific discovery and technology innovation.

“I believe that we have a role in getting concepts out of the lab and to the people who could see the benefits,” he said. There are always skeptics when technology is introduced, he added, referring to the early days of LCLS, “but every now and then you make some Jell-O stick on the wall…and it changes people’s lives forever. That’s what you do, that’s what the DOE does, and that’s why I’m proud to be a part of it.”

Top photo: On a tour of SLAC’s Linac Coherent Light Source X-ray laser, U.S. Department of Energy Secretary Rick Perry strolls down the undulator hall, where a series of magnets wiggle electrons fired by the lab’s linear accelerator to generate the brightest X-rays in the world.

Second photo: Secretary Rick Perry signs one of the undulators during a tour of the cryoplant that will help make X-rays faster and brighter at an upgrade to SLAC’s X-ray laser.