Atherton resident Bita Daryabari was the 2018 recipient of an Honorary Doctorate in Human Letters from her alma mater, Golden Gate University (GGU), where she also delivered the commencement address titled, “The Human Network Effect.” 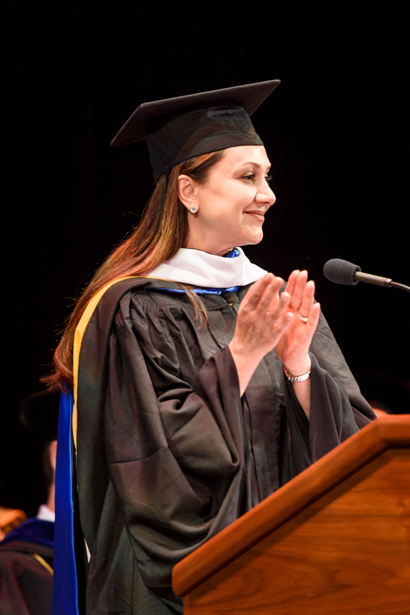 “She is an inspirational alumnus, not only for what she has achieved in her career, but also for her rich legacy of giving back and helping others get ahead. Bita is at the forefront of supporting immigrants in the United States, and her leadership in expanding access to US education for students from the Middle East is unparalleled.

Bita discussed her theory of “The Human Network Effect” as being more important than the Silicon Valley’s known “Network Effect”— the force behind the seeming invincibility of companies like Google and Facebook.

“Your friends and family; your colleagues and collaborators; the planet and its people — networks that can make you happy, successful and fulfilled. The more we contribute to these networks, the more they give back to us,” she said in her address. “Remember: of all the people in all your networks, these are the ones you need to look out for most. Because these are the people who have the most power to make you happy.”

She added: “Be generous. Respect the dignity of those around you. And, when you hit it big, as many of you surely will, spread the credit, share the wealth. Because this network is the people who have the greatest power to help you succeed professionally – on the terms that you define yourself.”

Bita founded and is the executive director of Pars Equality Center, the only non-profit organization providing comprehensive social, legal and community services to the Iranian-American community. Recently, her Center, along with The Iranian American Bar Association and the Public Affairs Alliance of Iranian Americans, filed an amicus (‘friend of the court”) brief with the United States Supreme Court in support of the challenge to the Trump administration’s third travel ban.

She has always held a passion for education and the arts. She created the Bita Daryabari Endowment in Persian Letters at Stanford University ($6.5 million), where The Annual Bita Prize in Literature has become the most coveted prize in the realm of Persian letters. She also gifted a $5 million endowment to the University of California, Berkeley, to further the study of Iranian languages, literature, history, arts and culture.