Renee Batti takes the helm at The Almanac 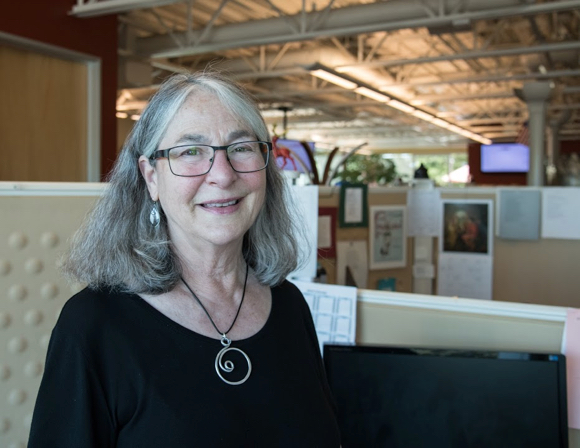 Renee Batti’s appointment as Editor of The Almanac brings things full circle, so to speak. But you need to be a long-term, mid-Peninsula resident to know that one of The Almanac’s founding papers, The Country Almanac, was started in 1965 by three women.

Jean Heflin, Betty Fry and Hedy Boissevain started the paper, which circulated to their hometown of Portola Valley and Woodside, because “local issues were not getting enough attention from the daily papers of the day, including the Palo Alto Times and the Redwood City Tribune,” according to an article in The Almanac celebrating that weekly publication’s 50th anniversary.

By all evidence, while it may have taken five decades to put a woman at the top again, it’s in very good hands, as Renee has been a keen follower of journalism almost from the time she could read.

“I read newspapers as child and watched the news with my parents,” she recalls. “I even tried my hand at drawing editorial cartoons.”

After majoring in journalism at Fresno State, she want to work at the Visalia Daily before landing a job as managing editor of the Pacifica paper. In 1991, Renee came to The Almanac as news editor when Tom Gibboney was publisher and Richard Hine was editor. [Note: Mort and Elaine Levine bought the Country Almanac in the 70s from its founders, and then in 1985, the Menlo Park Recorder, expanding circulation to Menlo Park and Atherton.]

While Renee’s duties are to oversee the editorial staff of the weekly paper, she admits she still enjoys writing the most, especially those stories that involve interviewing people in the arts, citing author Donia Bijan as one or her favorites.

“When I did daily journalism, it was a bit frustrating that you had to pop stories out quickly,” she reflects. “With commuinity journalism, you typically have a little more time.

“You report news that is important to your neighbors. You also are able to get a little deeper into the commuinity, spotlighting every day people and what they’ve accomplished.”

Congratulations, Renee!
We worked together at the Almanac what, 20 years ago? Wow!