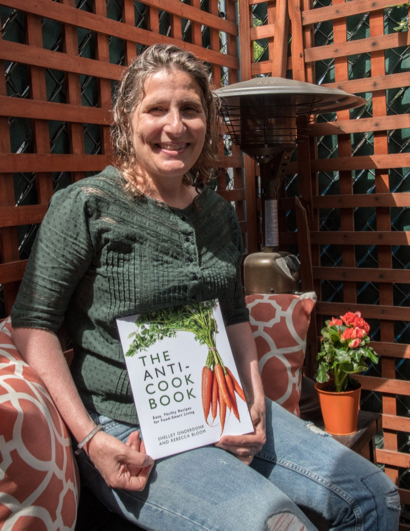 Menlo Park resident Rebecca Bloom is a lawyer turned writer. Her writing “partner-in-crime” and one-time college roommate, Shelly Onderdonk, is a veterinarian. It’s natural that the two, neither chef nor food critic, would combine for a new book, The Anti-Cook Book.

And not to be mis-understood: They are not against cooks, meaning the people who make meals for families and friends — or do so professionally. Nor are they against cooking. As they write in the book’s preface: “We believe that your food choices can affect your health, your pocketbook, and your mental state. Our hope is that our recipes and our stories about feeding our families and being fed by our forebears will resonate with you and bring more efficiency and joy to your food journey.”

For Rebecca, the book is being published just as she’s about to launch her second child off to college, becoming an official empty nester. “Both of my kids will be on the East Coast where I grew up and where my parents still live,” she said during a visit at Café Zoë, where there will be a book launch party on July 23 at 6:30 pm. “I’m going to start dating my husband. We’ve been so busy raising our kids and following our own career paths. Dating will be fun!”

To get the book published, Rebecca and Shelly started their own publishing company, Claws Out Press. “Mainstream publishers are looking for people who are already famous and have big social media presence,” said Rebecca. “We’re not chefs — and that’s exactly the point. We decided early on not to dig for that needle in a haystack that would involve finding a publisher.”

Just as they aren’t chefs, the co-authors are not marketeers either. But they’re working on reaching food and parenting bloggers across the country in what Rebecca describes as a “low key, modest marketing campaign.”

One of Rebecca’s daughters, Olivia did the illustrations for the book. She is the one off to college this fall. Here other daughter, who lives in New York was involved in the making of a film, Inventing Tomorrow, that was shown at the recent Windrider Film Festival. “What a thrill to sit in the auditorium at M-A, the school she graduated from, and watch that film — and meet the director!” she said.

For the next year, most of Rebecca’s efforts will be getting word out on the book. “So far, the reaction has been amazing,” she said. “It’s been so gratifying to hear from people who tell us that the book empowers them as well as making them feel not as bad about what they’ve been doing in the kitchen.”

Rebecca will have copies of the book at the launch party on July 23 at Café Zoë; copies can also be purchased online.