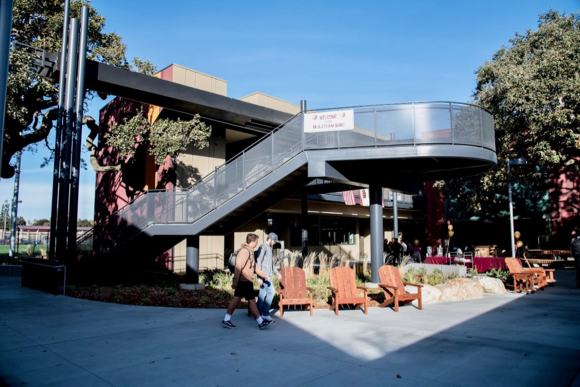 The M-A Choir led by Patrick Maier got things going with a rousing rendition of Steam sung to the melody of Dream by Johnny Mercer. A sample: “STEAM, watch your dreams come true, STEAM, it’s the thing you do. Just watch the wisdom rise in the air; you’ll find the genius in there.”

The buildings will host some geeky science classes — two physics and two environmental science — as well as house a maker space and what is now called culinary arts (home economics to old timers).

It’s an area that was once populated by dumpsters and known as  “trash bin alley.” Now it’s an avenue to a future whether with mind, hands or machine.

With STEAM’s opening, much of the construction at M-A, fueled by the passage of  Bond Measure A in 2014, is complete. The Bond Measure authorized the Sequoia Union High School District to increase its debt by $265 million. M-A was the recipient of $54 million of that. The two-story STEAM building came in at $12 million.

The “A” in STEAM comes from its position, which faces M-wing, home of choir, art and painting. Also debuting Tuesday were the maroon-painted tennis courts and new restrooms/kitchen.

“We are fortunate — and spoiled — to have such an amazing cluster of buildings,” said principal Simone Rick-Kennel. “After three years of construction, M-A is coming together quite nicely.”