The Tony Award-winning musical, Hairspray, will be performed on November 9, 10, 11, 16, 17, and 18 — 7:30 pm Fridays and Saturdays and 2:00 pm on Sundays — at the Menlo Atherton Performing Arts Center. Tickets are available in advance online and at the door.

Originally written by John Waters and made into a film, the show is an energetic homage to the musical style of the late fifties and early sixties. It follows teenager Tracy Turnblad whose dream it is to appear on a local Baltimore TV show. When she wins a role on the show, she becomes a celebrity overnight and uses her fame to fight to racially integrate the show.

M-A senior Sean Fabrega, who has been acting since her middle school days at Hillview, (pictured in rehearsal, top) plays Tracy. “Along with playing Little Red Riding Hood my freshman year in Into the Woods, this is my favorite role,” she said.

It’s also Sean’s first leading role at M-A. “I remember how intimidated I was when I was a freshman, so I’m enjoying the chance to talk with some of the younger cast members and hopefully make them feel more at ease,” she said. 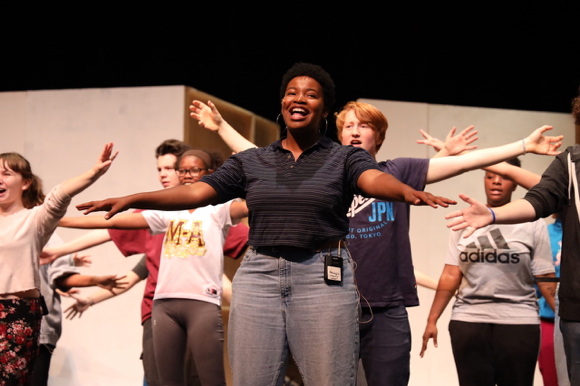 Drama teacher Danette Barthauer selected Hairspray as a deliberate way to attract more students of color into the drama program. “M-A is very diverse, but my (very sad) observation was that my program did not reflect our overall student population, and I was not ok with that…This has been a huge learning experience for me, and hopefully for our students.”

Senior Maya Jones, who plays Motormouth Mabel (pictured in rehearsal, above) is taking part in her first M-A production. “I’m very introverted and [Motormouth] is the opposite of that,” she said. “She’s like me on a very good day! She’s big and proud, and it’s fun to teach myself how to be more like her!”

Filled with laughs, romance, dancing, and songs, Hairspray won eight Tony Awards in 2003 out of 13 nominations, including Best Musical. It ran for 2,642 performances on Broadway, and there have been numerous national tours.