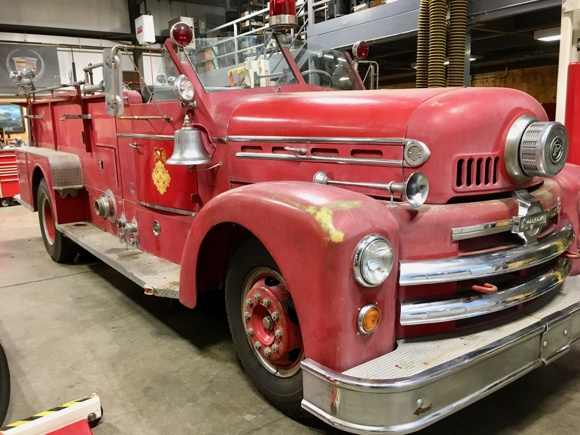 Fire Mechanics Steve Strom and Rudy Torres along with Division Chief Ben Marra, who supervises Feet Services, were shocked and surprised to find the Fire District’s former apparatus door logo behind a Juliaetta Volunteer Fire Department door sticker on a 1956 Seagrave Fire Engine the District had re-purchased in 2010.

In 1974, the Menlo Park Fire Protection District had sold the open cab 1956 Fire Engine to the Juliaetta Volunteer Fire Department, located in Southern Idaho, when it was replaced with a newer engine. While in Juliaetta, it responded to an average of 40 calls per year in a town with a population of just over 600 residents, until it was replaced as their only front line fire unit around 2000.

In 2009, Juliaetta Fire Chief Mike McGee contacted Chief  Harold Schapelhouman asking if they “wanted the engine back”. It was in rough but decent shape, and it was running, but sounded wrong. The Fire District negotiated a $4,000 purchase price and a donor came forward to cover that payment.

The unique style and lines of the 1956 two-person open cab Seagrave apparatus with new side doors for safety, had replaced smaller, prior open cab units with no doors built from the 1930’s to 1950’s. Unique to each unit with passenger and driver doors, the Menlo Fire logo was hand-painted with real gold leaf when it arrived, and it was not a factory item.

The Seagrave Company manufactured Squads, Engines and Ladder Trucks that could all be found as front line response units in all six of Fire District’s Stations from the 1950’s to the 1970’s. They then became reserve units and/or were replaced and sold off through the 1980’s when even larger, partially enclosed, flat nosed, four person cabs began to replace them.

With the motors now located under the cab, the simple standard half rocker “Menlo Park” and horizontal “Fire District” on all new apparatus doors replaced the hand painted, gold leafed, Maltese cross (fire service symbol) with the American eagle atop the cross. Explained Fire Chief Schapelhouman: “Little or no thought was given to keeping even one of these pieces of fire apparatus, let alone the unique and hand painted door logo’s, which are actually each works of art. There wasn’t enough space in the stations for these old work horses anyway, although I was sad to see them go when I started here in 1981.”

After the old 1956 Fire Engine arrived back in Menlo Park, it was discovered that the motor was on its last leg. Time was spent looking for parts to overhaul the unique dual V-12 motor with little success. Finally, a new motor was located on the East Coast, which was in good shape but still needed to be rebuilt. It took well over a year, performed by an ever disappearing group of people who actually know how to rebuild these types of motors.

Once the new motor was completed and arrived, the Fire District’s Mechanics worked on pulling out the old motor and replacing it with the new one when they had free time, which wasn’t very often. It also required fabricating some parts and getting creative at times. Finally, the Engine was brought back to life and safety checked.

Finding a place to have it painted here in the Bay Area was problematic due to its size, so it was decided to try and clean it up and buff out the paint. Taking off the old Volunteer Fire Department sticker was part of that process when the “discovery of a lifetime” was made.

“The sticker actually served as a shell that entombed the old Menlo Fire logo,” said Division Chief Ben Marra. “The high quality paint and gold leafing also made it so strong that it stayed intact. We all got goose bumps when we uncovered it like a time capsule. To think that it was sealed and preserved for 44 years and nothing like it exists on a single piece of Fire apparatus that is left today, that’s very special and really unbelievable.”

Should of called me. All Grider,Chapel and I did was rebuild those 12 cylinder double ignition. Great set of Menlo fire tools, the screwdriver, crescent wrench and a pair of pliers. We did so much with so little we thought we could do almost anything with nothing

This was a great article. I remember that engine well. I drove it in 1957.

Great find! I had to laugh about the “free time” statement.

How will the engine be used going forward?