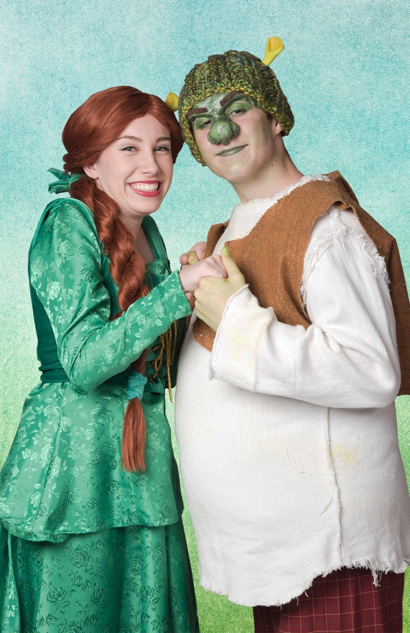 “I’m 15 years old have been involved in theatre since I was six years old, when I participated in a bunch of summer musical theatre camps,” said Samantha. “I became more serious about musical theatre when I was a part of my first Peninsula Youth Theatre (PYT) production, Les Miserables, in March 2015. Since then, I’ve been pursuing my musical theatre passion nonstop.

“My second show at PYT was in May 2015, Once Upon A Mattress. That is when I first met Charlie Hammond when we were cast as the roles of the “Minstrel” and the “Jester” (photo below). We became fast friends and have been in many shows together since. I’m excited because this is the first time since Mattress that we get to act opposite each other in a musical.” 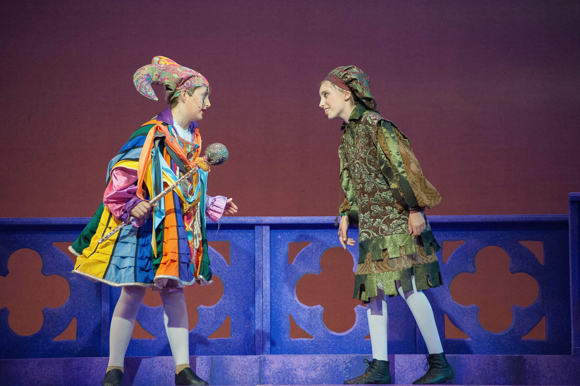 Added Charlie: ”I love absolutely everything about musical theatre — in fact my room is covered with Broadway Playbills. I have been performing for as long as I can remember, but my first show at Peninsula Youth Theatre was Once Upon a Mattress, when I was cast as the Jester. I had to dance a soft shoe number alone, and it was terrifying but so exciting. There is no place I would rather be than on stage! I met Samantha in Mattress, and we’ve been really close friends ever since. I’m so excited that we get to play Shrek and Fiona together!”

Based on the Oscar-winning DreamWorks Animation film, Shrek the Musical is an eight-time Tony Award-winning fairy tale adventure that brings all the beloved characters well known from the film to life on stage and proves there are many more layers to the tale than meet the eyes. It tells the story of the irreverent but lovable ogre who embarks on a life-changing adventure.

Joined by a wise-cracking yet truly loyal (and sometimes annoying) donkey, plus a colorful gang of misfit fairy tale characters, Shrek becomes the unlikely hero of the kingdom. He not only fights a fearsome dragon and faces the sinister Lord Farquaad, but he rescues a feisty princess and learns along the way that friendship and love aren’t only found in fairy tales.

“Shrek the Musical emphasizes themes of acceptance, inclusion, and diversity, as well as an enduring encouragement for believing in who you are,” said Loryn Hatten, producing artistic director at PYT. “It’s exciting that this show offers a positive and relevant message, particularly in today’s society where youth can sometimes struggle searching for their own identities and achieving a true sense of belonging.”

Content is appropriate for children of all ages. Ticket prices are $24 for adults, $20 for seniors (62+), $20 for students 18 and under, and $12 for children 5 and under. Please note that the City of Mountain View adds a $2 per ticket facility use fee to all orders. The city assesses additional fees depending on method of purchase. Tickets are available online or through the box office at (650) 903-6000.

What a nice article about kids who LOVE musical theater!