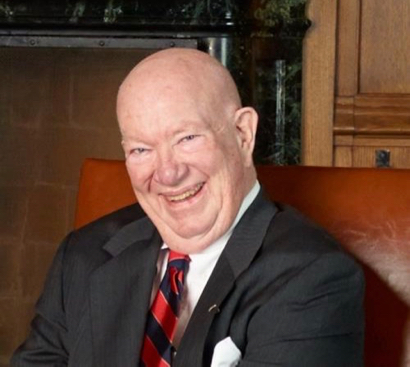 Long-time Menlo Park resident Emmett W. “Mac” MacCorkle III died March 2, 2019, after being struck by a delivery truck while walking in the Casa Dorinda retirement community in Montecito where he had moved last year. He was 77.

Mac was a larger-than-life figure, in spirit, personality, and physique. He bore a physical resemblance to Daddy Warbucks but possessed the warmth and charm of a spirited parish priest. He was a man with a common touch, yet an uncommon generosity of spirit.

“My brother was loved by everyone who knew him,” said his sister Alice Carrott Eidson, “and he treated everyone he encountered with respect and good will.”

Mac was the founder of MacCorkle Insurance Services in Burlingame, which he oversaw for 50 years. In 1980 was named “Man of Year, Peninsula Association Life Underwriters.” He sold the company that bears his name to his employees, retiring to Santa Barbara in June 2018.

He attended Cornell University and remained an active alumnus. Upon graduation, he was commissioned as a second lieutenant in the United States Marine Corps and served in Vietnam in 1966-1967.

Mac was a respected and beloved member of the Bohemian Club and served as its president. He served as Chairman of the Dawn Redwoods Trust and was a member of the Board of the San Mateo Historical Society and Board of Regents of Bellarmine College Preparatory in San Jose. He was a past president of Cornell Club Northern California and a member of the Menlo Circus Club.

A small private family service will take place in Santa Barbara with a larger gathering planned for the future.