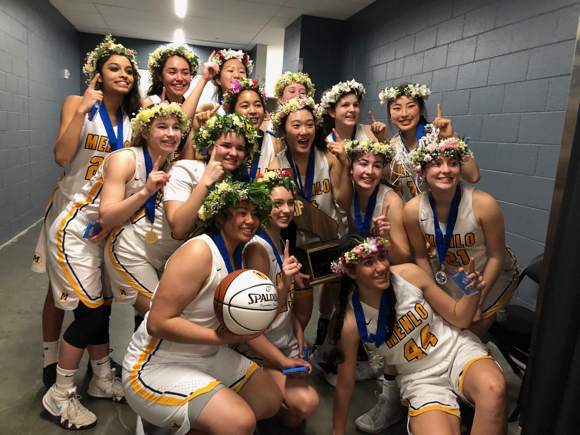 The youthful Menlo Knights closed the final chapter on an historic season with a D-II state championship on Saturday,  defeating Rolling Hills Prep of San Pedro by a score of 70-63. This was the Knights’ fourth state title in program history and their first since 1991. The team finished the year with a 26-5 overall record.

Sophomore Avery Lee engineered a masterful display of teamwork. She finished with 15 points, nine assists, eight rebounds and two steals. Coco Layton, also a sophomore, continued her three-point attack with five three-pointers and finished with a double-double and team-highs of 17 points and 11 rebounds.

When Lee’s shot wasn’t falling in the first quarter, she found other ways to contribute, driving then kicking the ball out to her teammates: “It was really great was just really trusting my teammates. It’s just really fun to play with them and be on the court with them.”

Freshman Sharon Nejad posted another double-double — 12 points and 10 rebounds — and junior Maeia Makoni had 10 points and was crucial to defending the Huskies’ tall and strong post player, particularly in the second half.

“Maeia did such a great job boxing out,” Nejad said. “It let me and the other girls go around and if you could see, we were boxing out so well that we had the whole umbrella open, and someone from our team would just swoop in and get the rebound.”

For coach John Paye, in his 17th season at Menlo, the win couldn’t be more sweet. Paye coached Menlo to its other three state championships, from 1989-1991 — teams on which sister Kate Paye starred. This one, too, has plenty of family ties. His daughter, Georgia, a sophomore, nailed four free throws in the second half to maintain Menlo’s lead as RHP stayed alive in the fourth. His sister Amy’s daughter, freshman Sylvie Venuto, is one of five call-ups from JV to help the Knights in the postseason. But the ties extended beyong bloodlines.

“This is my family today,” Paye said. “I know that we have a fairly young team and this is something we weren’t expecting at the beginning of the season, so it makes it even more meaningful.”

With 2:39 left, Rolling Hills pulled to within six when 6-foot-4 Clarice Akunwafo scored one of her team-high 17 points. The Huskies closed the gap to three but the Knights maintained their compusure and hit their free throws down the stretch.

“We just really stuck together as one, and I think that’s really important because we’re a really young team,” Lee said. “We definitely built upon that throughout the season and by the end of this tournament, we have become a really tight-knit team. We stuck together and it really helped us in the end.”