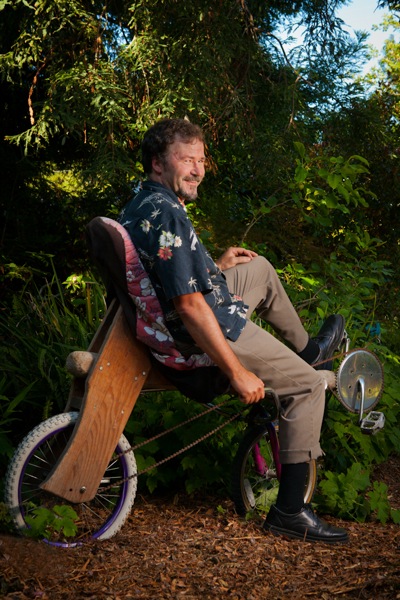 “Reclaiming Eden: Stopping climate change one household at a time” is a new initiative by Trinity Church in Menlo Park.

“All around us, the ramifications of climate change are becoming more real,” said the Rev. Matthew Dutton-Gillett, rector at Trinity. “The earth is under pressure, and she is not doing well. And when the Earth, which we describe as our ‘fragile island home,’ does not do well, we do not do well.”

The initiative will kick of with local energy efficient expert and green homeowner, Tom Kabat (pictured right on one of his personally-constructed wooden bikes) speaking at the church on Sunday, March 17, at 11:30 am on the topic “Introduction to Climate Change, Green Your Electricity.” Lunch will be served, and the wider community is welcome.

“My climate action was to replace my gas water heater with an efficient solar powered heat pump water heater,” Tom told Menlo Spark. “It runs off of my solar photovoltaic system with some of the extra electricity I produce.”

According to the initiative’s organizers Nancy Grove and Josie Gaillard, 73% of Americans now believe global warming is real. The focus will be on six actions that individual households can take: green your electricity, green your transportation, electrify everything, reduce or offset air travel miles, eat less red meat & waste less food, and consumer mindfully.

The initiative also casts shadow on the idea that science and religion are mutually exclusive.

“In the public imagination, religion and science are often seen as being in conflict,” said Dutton-Gillet. “But for The Episcopal Church, there is no inherent disagreement between the two. We see them as different areas of inquiry.

“Episcopalians are able to acknowledge that while religion roots us spiritually, helping us to make life meaningful and to be our best selves, science gives us insight into the nature of reality and how the world works. Both contain a great deal of mystery.

“Historically, they have always been partners. It is only in the last couple of hundred years that they have been seen to be adversaries by some segments of the Christian tradition.

“As we face an unprecedented environmental crisis, we need to bring both the resources of religion and of science to bear on the problem so that we can be our best selves in making meaningful choices that can help save our planet.”