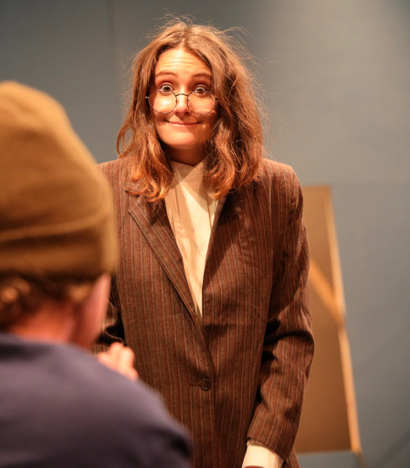 Presented by Menlo-Atherton High School Drama, the Broadway comedy, The Man Who Came to Dinner, will be performed on March 15, 16, 17, 22, 23, and 24 — 7:30 pm Fridays and Saturdays and 2:00 pm on Sundays — at the Menlo Atherton Performing Arts Center. Tickets are available in advance online and at the door.

Written by George S. Kaufman and Moss Hart for the Broadway stage and later made into a film, the show is a fast-paced comedy that illustrates the chaos that ensues when a celebrity’s power gets out of hand. The storyline follows famed radio host Sheridan Whiteside who overstays his welcome at a star-struck family’s home over the holidays. When his long-time assistant falls in love with a local newspaperman, Whiteside concocts a devious plan to keep the two lovebirds apart.

M-A junior Louie Leon, who has been acting since his Hillview Middle School days, (pictured in rehearsal) plays the celebrity radio host Sheridan Whiteside. It’s Louie’s fifth role at M-A, having acted in last year’s Joseph and the Amazing Technicolor Dreamcoat. “I enjoyed working with the cast and crew of The Man Who Came to Dinner immensely. The wheelchair, fancy clothes, and my many one-liners are also quite nice,” he said. 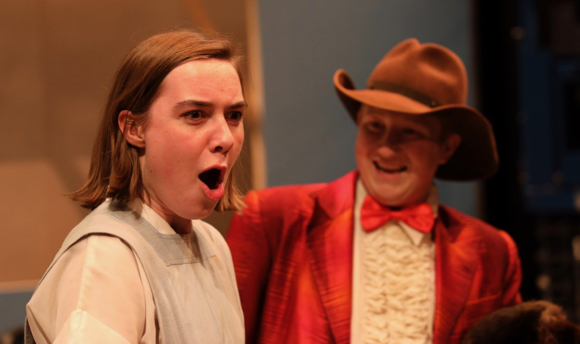 The show’s director and M-A drama teacher Danette Bathauer selected The Man Who Came to Dinner in part because of the message it conveys about the power of celebrity. “From an artistic perspective, this show provides an interesting way to look at how people treat celebrities differently and the worship that occurs between everyday people and celebrities,” she said. “It even happens today.“

Leading lady sophomore Laura Fesas, who plays Whiteside’s assistant, Maggie Cutler, commented, “It’s a great cast. It’s a great show. The play is interesting to see what life was like in 1939. The way people talked and dressed was very different.”

Filled with laughs, intrigue, and romance, The Man Who Came to Dinner ran for two years on Broadway and has been revived many times as a play and movie starring a variety of actors including Nathan Lane, Orson Welles, and Bette Davis.