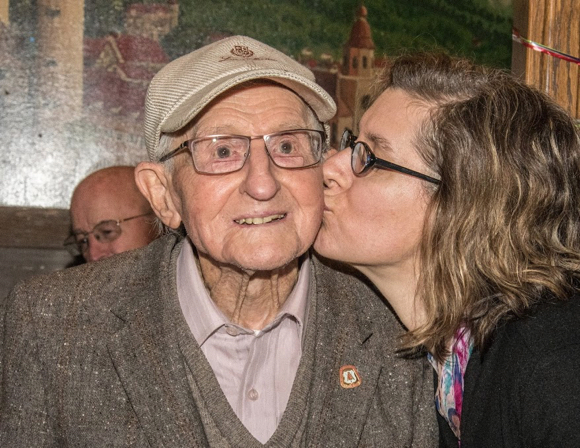 We received word that 105-year old “Atherton Treasure” Louis Matas, passed away at his home in Atherton on April 3. Wrote his neighbor and good friend Doug Anderson: “His friendly attitude and smile will always be remembered by all who knew him.”

As has been the tradition, Lou celebrated turning 105 in January at Harry’s Hofbrau surrounded by long time friends and family. A representative of the Carpenters Union #217  was there to congratulate him as was Atherton Mayor Bill Widmer.

At his 103rd birthday celebration, Doug provided us with some highlights from his life:

InMenlo contributing photographer Robb Most captured Lou receiving a kiss from his granddaughter Patricia in 2017.

A celebration of Lou’s life is being planned for June.

Lou was such a precious man to me.
I have always enjoyed his company at Banjos. He always sat at the same chair. That was Lou’s chair.
What a smart man he was. So active.
I feel very honored that for the past five years I was able to help put on his birthday parties at Harry’s. This past Jan. we celebrated his 105th party with so many of his family and friends there. What an evening that was. I would like the family to please keep all the photo albums I made from Lou’s past birthday parties. He loved those picture albums.
Lou, may you Rest In Peace. Till I see you in the next life.
I will always be looking for you at Harry’s.
Laurie

Sorry I won’t be able to play that day. I loved Lou
And admired his lust for life. True inspiration.
Delightful Debbie