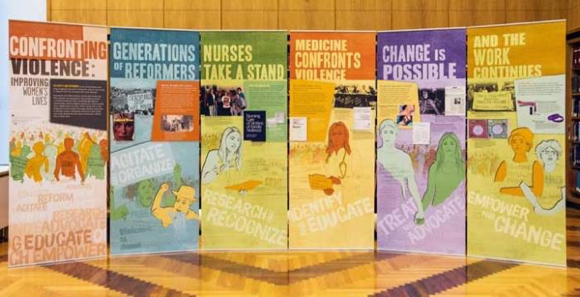 Activists and reformers in the United States have long recognized the harm of domestic violence and sought to improve the lives of women who were battered. The Menlo Park Library’s temporary exhibition, Confronting Violence, Improving Women’s Lives, explores the developments during latter half of the 20th century, when nurses took up the call.

Beginning in the late 1970s, nurses were in the vanguard as they pushed the larger medical community to identify victims, adequately respond to their needs, and work towards the prevention of domestic violence. Visit the Main Library to experience the interactive exhibition panels and come for a series of related programming.

The National Library of Medicine produced this exhibition.

Since its release in 2006, this award-winning documentary has been used in the global movement to end violence against women and children. The screening will be followed by a discussion with representatives from Community Overcoming Relationship Abuse (CORA).

How did we get to #MeToo? This film explores the role of friends, teammates, classmates, and co-workers in perpetuating sexual harassment, assault, and other forms of gender violence.

As the largest network of domestic violence service providers in the U.S., YWCA creates practical solutions to protect survivors, empower advocates, and eradicate all forms of gender-based violence. Their Director of Social Change will share how to be part of those solutions.

Join us to talk about the specific tactics of power and control used to perpetuate domestic violence (DV). Through interactive activities and discussion, we will work together to gain a deeper understanding of DV and learn some key ways we can all support the survivors in our lives.

Siavash Zohoori was a near victim of a mass shooting at UCSB in 2014. He transformed that traumatic experience into a mission to help to instill values of respect for women, emotional expression and connection with others, and empathy for fellow human beings.

In 1920, the 19th Amendment granted women the right to vote. The League of Women Voters of South San Mateo County will explore the suffrage movement, including the birth of the League as a “mighty political experiment