“Winning the Vote: the Fight Continues” is topic at Menlo Park Library on Aug. 14 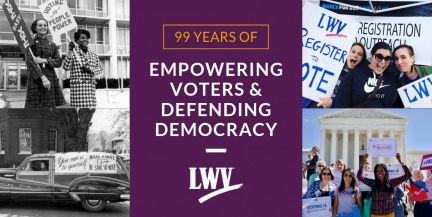 In honor of the 99th anniversary of women’s suffrage, listen to a talk about the “mighty political experiment” of granting women the right to vote on Wednesday, Aug. 14, from 7:00 to 8:00 pm in the Downstairs Program Room of the Menlo Park Library.

In 1920, the 19th Amendment granted women the right to vote. The League of Women Voters of South San Mateo County will explore the suffrage movement, including the birth of the League as a “mighty political experiment,” and the strides and setbacks involved with making democracy work for everyone.