The “Green Shutters” house in Atherton remains a mini-mystery 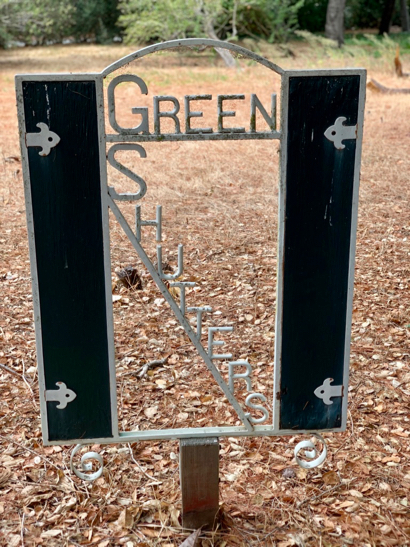 Wandering the streets of Atherton, we happened upon a for sale sign at 226 Park Lane, a 1.43 acre property being marketed as a tear down for a cool $14,988,000. That was sufficient to get our attention, but we also noticed a weathered sign — Green Shutters — so we figured there was a story here of some kind.

Marion Oster of the Atherton Heritage Association filled in some background: “226 Park Lane is one of the older homes in Atherton built in the early 1900’s. [1921 per real estate listing.] It was extensively remodeled in the 1990’s.

“The original owner was Alice Slemons who owned it from 1900 until 1960. The property was owned by Atherton Council Member and past Mayor, Nanette Chapman and her husband Ron. They sold it  and moved to Woodside.

“There isn’t anything in the files that indicate that it was used for a house tour or that anyone thought it was ‘unusual or special.’ I would assume that it would be torn down as a much larger home could be built on that property. There is nothing in the records that indicate why it was called the ‘Green Shutters’ home.”

Aha, now we had a lead as we got to know Nan Chapman, now deceased, through her volunteer work for the Menlo Charity Horse Show and the Horse Park in Woodside. Horse Show founder Betsy Glikbarg seemed a likely person to know the background. 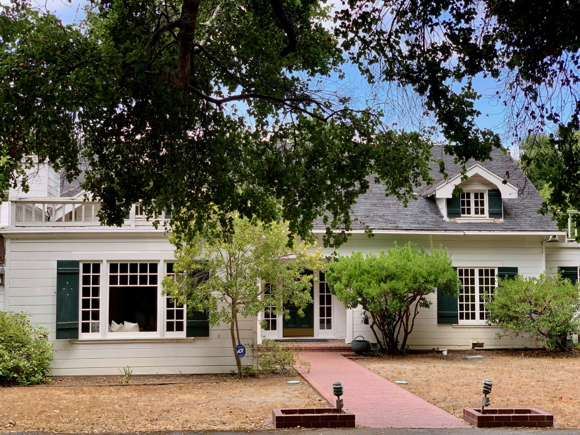 Her reply to our inquiry: “Nan and I grew up together in San Francisco and were friends way back then.

“Here’s your answer on Green Shutters.Their home had green shutters which were a little small. They had a sign made that said green shutters and it was stolen. So they had a bigger sign made and that’s the one that still remains.

“Why am I so smart? Because I called Nan’s husband and asked him!”

Call us sentimental but hoping the people who buy the property donate the Green Shutters sign to Atherton Heritage, or find a place to tuck it away near whatever they build.

Additional note: we did reach out to Pamela Gullard, who with Nancy Lund, wrote Under the Oaks, a history of Atherton. She told us that the Green Shutters home was not covered in their book. Like Marion, she, too, is curious if anyone knows anything else about its history.