Menlo College hosts TEDx conference with theme “This is America” 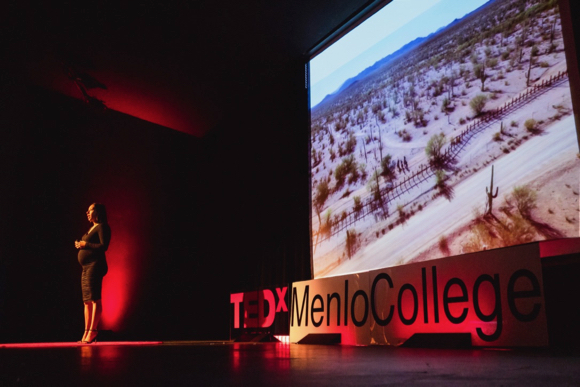 On September 21, 2019, Menlo College launched its first ever TEDx conference, centered on the theme This is America. TEDx is a program of local, self-organized events that bring people together to share a TED-like experience. At these events, TED Talks, video and performances combine to spark deep discussion and connection in a smaller setting.

Menlo’s full-day event included speakers who expressed big ideas bolstered by moving personal experiences, and performers such as Royalty, a spoken word artist and poet who presented a powerful poem about racial inequality. Royce Lovett, a hip-hop artist, singer and songwriter, closed out the program with an optimistic song about the power of love. He said, “We can’t wait for America to fix itself; we have to fix it. We have to know love, show love and teach love.” 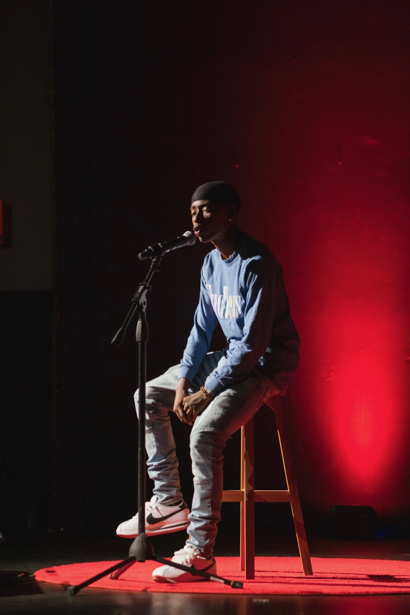 By qualifying for a TEDx license, the student-led Menlo College team earned the opportunity to choose a theme, select speakers, invite attendees to campus, and produce talks to be posted on the TED platform. The theme This is America was open to many interpretations, said Executive Director and Curator Sachal Jogi ’20. He noted that for many, “America represents a strong economy, diversity, and creativity, while at the same time there is great uncertainty coming from the shifting social, political, and technological factors in society. There are two sides, our history and what’s happening next.” Jogi recalled that the topic of identity arose as the diverse team began to talk about their own American experiences.

With a student body representing 38 countries and 29 states, Menlo College is a community that is enriched by many viewpoints each and every day. “Our students come from a broad array of circumstances and backgrounds,” said Menlo College President Steven Weiner in his welcoming remarks. “That diversity informs today’s talks.”

Speaker topics included immigration, gender identity, privilege and structural inequality, mental health and teen entrepreneurship. Several speakers addressed the challenges of growing up “other” in America — trying to fit into a society that wasn’t made for those who looked like you. Many shared how they overcame overwhelming challenges.

Speaker Sarahi Espinoza Salamanca (picture top) arrived as a child from Mexico, and excelled at school. But when she tried to apply for college, she discovered that she did not have a social security number — her family was undocumented. Today, Espinoza Salamanca, 29, is a graduate of Canada College and founder of DREAMer’s Roadmap, a free mobile app that helps undocumented students across the country find college scholarship opportunities.

Mahmoud Khedr, who emigrated from Egypt to New York City as a child, is the co-founder and CEO of Flora Mind, a social-impact driven company that partners with high schools to provide mental health and well-being programs. He also holds a degree in Social Entrepreneurship at the City College of New York and is a Forbes Under-30 Scholar. But he faced personal crises before success.

At one point, Khedr’s despair was so great that he attempted suicide; in his talk, he showed excerpts of his suicide note. Khedr’s topic: “toxic positivity,” a forced optimism that many in distress are encouraged to adopt, masking their deep depression. Calling out to an audience member in the second row, he said, “Imagine if, God forbid, you broke your arm and instead of taking you to the hospital to treat your pain, I told you.. Just be happy!!” For Mahmoud, that’s toxic positivity. Instead, he posted a list of ways to start constructive discussions with people to show true empathy.

Lilliana Chisler ’22, a Menlo marketing and sports management major and soccer player who is also Vice President of the Social Justice Club, spoke about institutional racism and privilege. “Being silent (about a social justice issue) because it doesn’t affect you doesn’t make you neutral; it makes you complicit,” she said.

TedX Menlo College ended with an extended standing ovation. But what about the long-range impact as the online talks are shared across the state, the country and perhaps the world? Here’s what Menlo College political science professor Dr. Melissa Michelson suggested in her talk “How to be an Ally for Social Justice.” “Imagine launching a boat across a body of water, sailing from prejudice to inclusion,” she said. “With each conversation, you’re giving that boat a little nudge toward the other shore.”

Photo top of Sarahi Espinoza Salamanca and side of spoken word artist Royalty by Esteban Ramirez, courtesy of Menlo College

Author Lauren John is an English professor at Menlo College