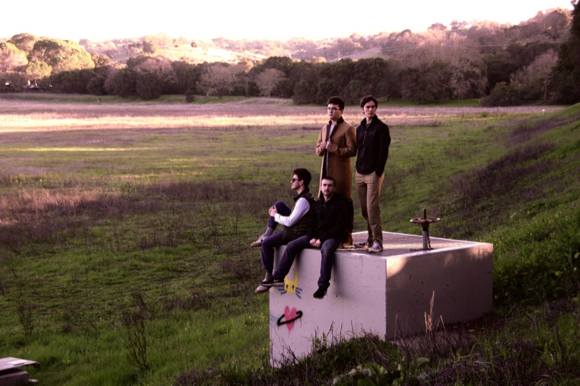 Menlo Park native Zach Plante’s musical interest started in the classical realm. Growing up he took piano from Katherine Oh and performed in recitals at his parents’ house.

“Around age 12, I made the switch from classical to more popular styles,” he said. “Today, I’m still working on discovering where my musicality lies, although it’s much within the rock and jazz realm.”

Zach, whose principal instrument now is bass guitar, was in a number of garage bands when in high school at M-A.  While an undergrad at Dartmouth, he was in a band called Winterhill. “We did a little touring and released an EP,” he said. “The band members were from all over the world, so we were forced to break up when we all graduated.”

Now Zach, who is a research assistant at Stanford, has teamed up with a new group of Stanford students, all of whom are in the class of ’21, to form Pass By Catastrophe. “I’m the old guy,” he quipped.

They’ve just released a EP; you can listen on Spotify. “We’re really hoping people will listen and give us feedback. We feel it’s music for all ages and backgrounds.”

While Zach intends to pursue a PhD in earth sciences, music is not something he intends to leave behind. “I play a lot of music socially,” he said. “I’m influenced by the people I meet and all the musical tools I’ve developed along the way.”