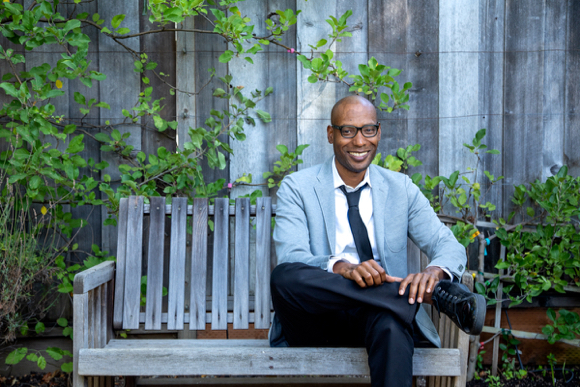 When Menlo Park City Council member Drew Combs and his wife moved to the Bay Area from Southern California, a priority was a community with a walkable downtown. They found that in  Menlo Park, eventually settling in the Willows where they can also amble over to Cafe Zoë.

Formerly a journalist and now a Privacy Program Manager at Facebook, Drew was elected to represent District 2 in last year’s fall election. “I’d run four years earlier when it was a city wide election and lost but not after canvassing every house in Menlo Park,” Drew said. “Representing a District mean less door knocking!”

He believes his sense of public service comes from his mother. “She had a broad definition of family and community, that the two are interchangeable,” he said. “That led to helping people out.”

Drew has a law degree from Harvard, where Elizabeth Warren was his contracts professor. “She had a big personality even in the classroom,” he recalled. “You didn’t try to take her on!”

He never practiced law, although he was a reporter for the magazine American Lawyer for five years, and he initially joined Facebook as a content specialist.

His civic involvement with Menlo Park began with the bike commission, followed by the planning commission. Through participation on the commissions and now on the City Council, he finds the topics addressed engaging and interesting.

His biggest surprise since being elected to the Council is that all the members really hit the ground running. “We are a band that’s come together even though we’ve never played together before,” he said.

“I do enjoy it,” he continued, “and we’ve taken on some substantive issues — homelessness, minimum wage, to name two that received considerable public attention.”

Then there is the responsibility of being responsive to your District 2 constituents.

“I didn’t think I’d be called upon to be a speed bump negotiator, but a Willows resident contacted me because the city had started to put speed bumps right in front of his driveway, which would have made it very difficult to come and go. I talked to the city on his behalf, and the placement of the speed bumps were moved a few yards away. That taught me that people expect to have an advocate in their elected official!”