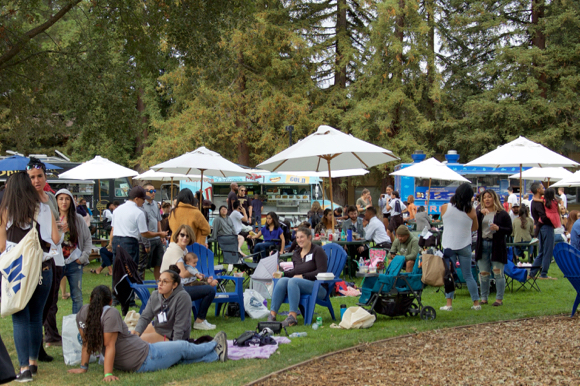 On October 19, 2019, over 2,200 alumni and friends of Menlo College honored their connection to the school by playing hard-fought and sometimes hilarious alumni versus varsity games, dining at food trucks, watching student talent at an outdoor stage, and delighting in old and new friendships made through the College.

Featuring “connections across generations,” according to Dr. Marianne Neuwirth, Director of the College’s Oral Communication program, the event found baby strollers parked next to the picnic tables where alumni, professors, students and staff introduced family members. There were ping-pong competitions, toss and pitch games, and a climbing wall.

The College showcased its sense of community across its renovated campus. “The pathways, landscaping and grounds are outstanding and welcoming,” said Alan Fernandez ’04, a music and arts promoter who is now in his second year on the Menlo College Alumni Council. He made these observations at an  alumni brunch hosted at College President Steven Weiner’s campus home.

Fernandez, now 55, attended Menlo College as an older student and says that he continues to serve the College because “Menlo gave me dignity and a sense of accomplishment…especially since I had an academic journey that moved outside a traditional college path.”

John Rohrer ’89, now a strategic account manager at Dell Technologies, invited his wife to the alumni brunch. “The small campus creates a culture of community,” he said, “and what is unique is that even graduates who live far away try to come to OAKtoberFest every year.”

Rohrer, valedictorian of his class, was pleased to see Menlo Economics Professor Dr. Craig Medlen at the brunch. “He was an anchor person for me and I think about what he taught me even now 30 years after graduation.”

Menlo’s most recent valedictorian, Zacchaeus (Ziggy) Beatty ’19, now working in audit assurance at Big 4 accounting firm PwC, warmly greeted his accounting professor and mentor Dr. Janis Zaima. Beatty observed that “the study skills that I learned at Menlo have helped me greatly as I train to be an auditor.”

As the afternoon closed, senior Brenda Flores ’20 and her mother, Lilliana Reyes of Castro Valley, chatted with Menlo’s Provost Grande Lum. “I’ve been coming every single year to see Brenda on the dance team,” said Reyes. “Menlo is such a warm, welcoming place. I could not have found a better school for my daughter.”