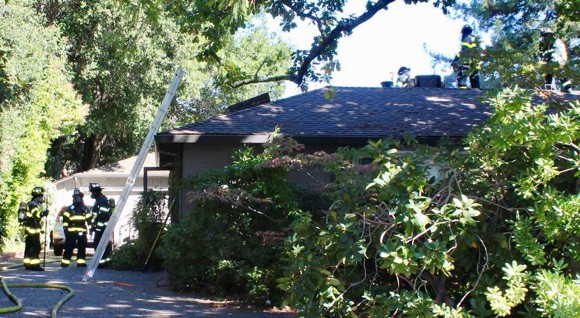 Menlo Engine One, with Acting Captain Brian Berger and crew. arrived on-scene at a residence on Fanita Way in Menlo Park on Monday shortly before noon and reported that there was “light smoke in the area coming from a single-story residential home with a woman standing in front of the home.”

The woman told firefighters she was cooking fish in oil on the cook top when it caught on fire with the flames reaching the overhead exhaust fan and hood. She quickly and properly smothered the fire and turned off the stove, but later heard crackling in the ceiling, noticed the fan screen was red hot and white smoke was coming out. She then smartly called 911 and went outside to wait for firefighters to arrive.

Acting Captain Berger entered the kitchen and noticed the overhead fan screen was now on fire. The crew punched a hole into the kitchen ceiling next to the fan assembly and immediately found that they had an active attic fire that was threatening to quickly spread into the home’s entire attic space. Berger asked that attack hose line be pulled into the structure and requested roof ventilation along with additional crews to pull the ceiling and salvage property inside the home.

Menlo Truck One arrived on-scene and was directed to cut a ventilation hole with chain saws above the fire in the roof so smoke and heat could be directed upward and out of the building, thus helping to stop its spread and reduce the overall chance of a backdraft explosion or flashover which could have then spread to the entire attic. Additional arriving Engine crews were directed inside the home to assist with fire suppression, pulling down ceiling in the kitchen and salvaging and protecting other items in the home by moving, or covering them. The fire was completely extinguished and brought under control by 12.20 pm.

Fire Investigators determined the cause of the fire was “accidental” and “human error” in using a cooking item like the pan of oil. However, contributing to its spread into the attic space was the ventilation flu pipe not containing the fire and/or properly directing it outside the home and attic space above the roof line.