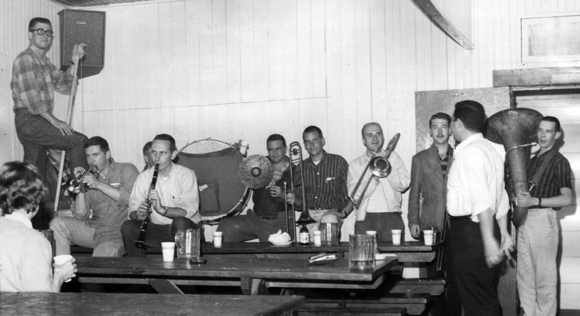 In 1960, two Stanford University roommates, Jim Harvey (pictured fourth from right above) and Don Nelson, assembled a loose cadre of friends interested in playing music and drinking beer and created what would become known as the Los Trancos Woods Community Marching Band (LTWCMB).

Band members and their invited guests will be celebrating the occasion at a dinner this weekend. 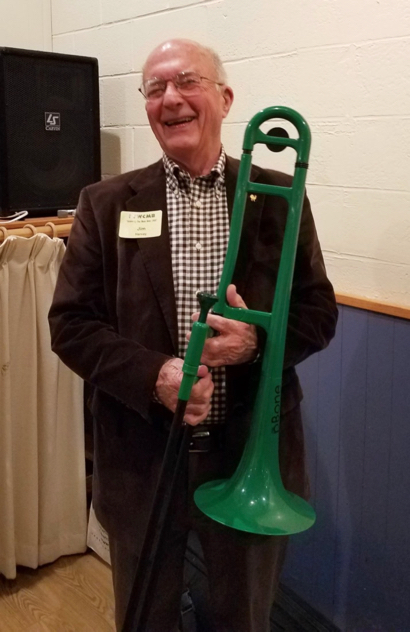 “Prior to January 1, 1960, there was a nameless group of musicians you might refer to as an indoor party band,” recalls Jim (pictured right), a Menlo Park resident. “Most of these folks were staff members of the campus radio station, KZSU, and a few were members of the Stanford Band. There were frequent KZSU staff parties in those days, always held at some off-campus home, and we always had our own home-made music.

“In 1959, a favorite party location was a home in Los Trancos Woods. On the evening of December 31, 1959 one such musical party was held there, and several musicians spent the night there. When the sun came up on New Years’ Day, 1960, it was bright and sunny, prompting someone to suggest that we ‘go outside and get some fresh air.’ 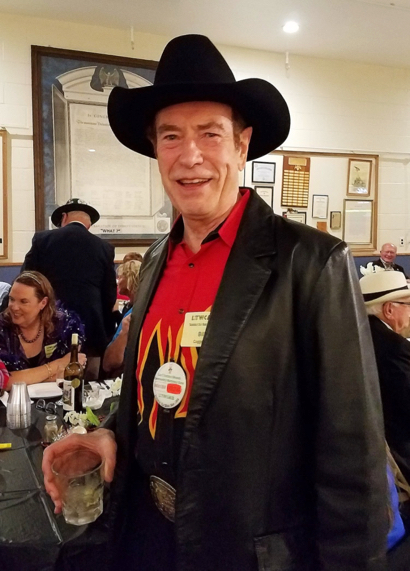 “One thing led to another, and we were soon marching around the one-way circle at the end of Los Trancos Road, playing our instruments, attracting children and dogs along the way. Because this was the first time our band had ever played outdoors in broad daylight, we decided to give ourselves a name: The Los Trancos Woods Community Marching Band.”

One hallmark of the LTWCMB is its lack of uniforms. “At least not matching uniforms,” says band member Bill Coggshall, “though some individual band members might sport a former uniform (in whole or in part). Part of the appeal of the band is the creative and unusual outfits reflecting the personalities of the band members.”

The band’s repertoire is equally eclectic, comprising mostly well-known traditional American tunes, such as: California Here I Come, Happy Days Are Here Again, How Much Is That Doggie in the Window? (a must-have for pet parades), Mickey Mouse Club March, Take Me Out to the Ball Game, and Walk Right In.

“All of these tunes are played, then sung, and played again,” explains Bill (pictured right in red shirt), who is also a Menlo Park resident. “All that playing and singing (and sauntering) demands liquid refreshment, so the band has a beer cart that marches along with the band.” 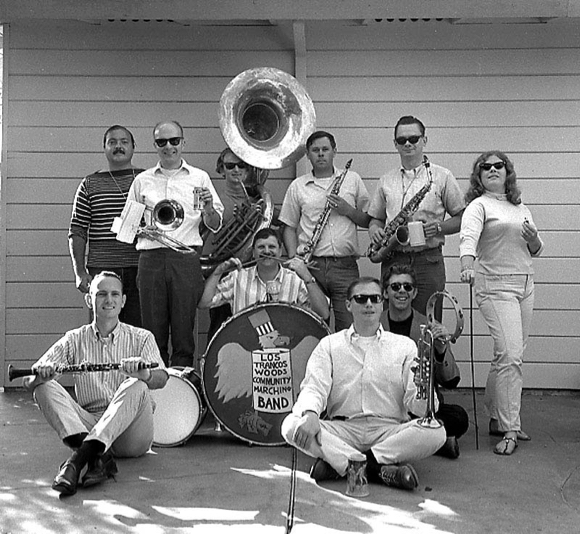 Today, the band’s lounge comes with food and drink. “Zott’s” (the historical Alpine Inn Beer Garden, formerly Rossotti’s) is on Alpine Road, within striking distance of Los Trancos Woods. Weather permitting, on the first Sunday of each month the band holds Tuba Sundays, when it hangs out and plays music (no marching) at Zott’s.

Asked about a favorite memory, Jim says: “Years ago, the town of Rio Vista (on the Sacramento River) held their annual Bass Derby, Parade, and Carnival. In those days, we could charter a bus for a day to take the band there and back for $300 or so, which would give is a chance to do some partying on wheels, as well. After the parade, we would check out the saloons in town, including Foster’s Big Horn, featuring stuffed animal heads on the walls.

“One year, I noticed the Ferris Wheel was nearly empty, so I approached the operator and proposed that he put the band on the Ferris Wheel to “drum up” some business, and we wouldn’t charge him anything. He agreed, so, two by two, we all got onto the wheel and it started spinning. We started playing our usual repertoire and the crowds started forming, which fulfilled our part of the deal. For our band members, the sound was psychedelic, to say the least, with the sounds from other instruments continually circling around, below, and above us as we played!”

The LTWCMB members are of all ages and come from all walks of life. The band is always happy to have new members. There are no auditions, and no prior experience is required. “All that’s needed is an interest in having musical fun!” says Bill.

Top photo: Rehearsal at Zott’s in 1960; bottom photo from the Dutch Martinich collection of a 1967 rehearsal; Jim Harvey is standing, white shirt with beverage in hand.

Love the LTWCMB. I live in the Woods. Thank

As Semiconductor of LTWCMB I do have to announce that this Upcoming event is NOT open to the General Public – it is Only for band members in good standing.

However, everybody is invited to join the band and participate in all of our upcoming parades throughout the year. We will be marching in San Francisco’s Saint Patrick’s Day Parade and Woodside’s May Day event. Redwood City’s July 4th is always a great event!