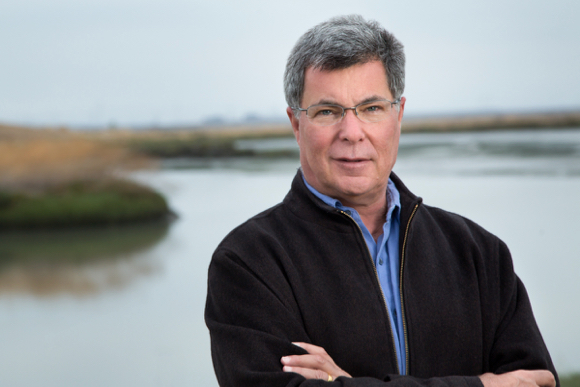 Michael Schwarz, a longtime Menlo Park resident with a gift for documentary storytelling, died unexpectedly on Dec. 1 at age 66 as a result of a fall in his home.

A memorial service celebrating his life will be held on Wednesday, Jan. 15, at Stanford Memorial Church from 4:30 to 5:30 p.m.

His untimely death occurred just weeks before a documentary he made with his wife, Kiki Kapany, called Ornament of the World, aired nationally on PBS.

Schwarz was born in Woodmere, New York, in 1953 to parents Bobbie and Stewart, and grew up skiing and playing various sports.

He graduated from Yale University and went on to work in broadcast journalism for a number of years at Granada Television’s World in Action, a British investigative television series, then as researcher and associate producer for The Red Army, about the Soviet military.

He later co-produced Abortion Clinic (1984) for PBS’s Frontline, then Living Below the Line (1985), about a dying shipping industry in Chester, Pennsylvania, and its economic impacts.

From 1986 to 1988, he completed a Fulbright Fellowship teaching broadcast journalism in Malaysia, India, Sri Lanka, Indonesia and Papua New Guinea.

After returning to the United States, he worked as a senior producer at KQED in San Francisco, later working there as director of news and current affairs, then as senior executive producer. In 1996, he left KQED to start his own media company with his wife, Kiki Kapany.

Kapany was his partner in life and filmmaking. They met in 1989 at a bar; that night Kapany said, she knew she would marry him. After an initial conversation and dance, they parted ways without exchanging phone numbers. Fortunately, they ran into each other again at a restaurant days later and swapped contact information, she recounted, adding that the following Valentine’s Day, nine months later, Schwarz proposed to her.

They had two daughters, Ari and Misha, and the family traveled widely.

“As a documentarian, he traveled the world with his daughters teaching them about cultures and progressive values,” his family wrote in a prepared obituary. “He gave them the world. Michael encouraged his daughters to be both curious and compassionate. As a father, Michael was close to perfect.”

At Kikim Media, Schwarz and Kapany pursued a range of projects, with Schwarz as the company’s president, producer and director and Kapany as CEO. Their projects include dramatizations of food writer Michael Pollan’s works, The Botany of Desire and In Defense of Food, a series about the history of Silicon Valley shown on the Discovery/Science Channel, and the challenging, controversial Muhammad, Legacy of a Prophet.

Most recently, PBS aired their project, Ornament of the World, on Dec. 17. The documentary explores an 800-year period of religious harmony, conflict and interaction between Christians, Muslims and Jews in medieval Spain.

The tagline of the Kikim Media website states, “A true story, honestly told, can change lives,” and Schwarz seems to have held to that belief throughout his storied career.

A longtime friend and fellow filmmaker, Dave Iverson, said his friend was a “really lovely human being, a very talented director and filmmaker and one of the most determined people I’ve ever known.”

What distinguished Schwarz as a filmmaker, Iverson said, was his curiosity about the world and his commitment to telling true stories in a way that could reach a broad audience.

“He was interested in everything from science to the arts,” Iverson said. “His fiercest allegiance was to telling the truth, and telling it in a way that people could relate to … no matter their background or political allegiance.”

Over the years, Schwarz’s work was honored with prestigious awards in broadcasting: three national Emmy awards, two George Foster Peabody awards, the Alfred I. DuPont-Columbia University Journalism Award for Investigative Journalism, the Investigative Reporters and Editors Award, red and blue ribbons from the American Film Festival, four awards for excellence in local broadcasting from the Corporation for Public Broadcasting, the grand prize in the Robert F. Kennedy Journalism Awards for Coverage of the Disadvantaged, and a number of Cine Golden Eagles and local Emmys.

He is remembered for his personal ease, sense of humor and gentleness.

He is survived by his wife, Kiki, their daughters Ari and Misha, his sister Debbie Funderburk, and extended family members, and is remembered by friends and colleagues around the world.

His family is asking those interested in making a memorial donation to consider supporting Science Bytes in his memory. It is a science education film project he worked to bring to fruition. Learn more here or make a donation here.

This post originally appeared in the Almanac News; used with permission

My condolences to the family.

Michael & Kiki are not just clients at the pet hospital – They have become our good friends. My sincerest prayers to the family.