Sacred Heart Prep grads Tierna Davidson and Ben Burr-Kirven were selected by MaxPreps senior writer Mitch Stephens as among the 15 “best of the decade” to compete in Bay Area prep sports. Tierna was ranked #7 and Ben #10, based 75% on high school performance and 25% on post-prep credentials. Both grew up in Menlo Park.

In an article that appeared in the San Francisco Chronicle today, Mitch wrote about Tierna:

“Tierna Davidson (Sacred Heart Prep-Atherton girls soccer, 2013-16) — A two-time West Bay Athletic League MVP midfielder, she led SHP to two CCS titles and a runner-up finish and a 53-10-8 record in three seasons, when she piled up 57 goals and 48 assists.

“Post prep: The 2019 World Cup champion had two stellar seasons at Stanford, earning national Defensive Player of the Year honors as a sophomore, leading the Cardinal to a national title. She broke her ankle as a junior then skipped her senior season to enter the 2019 NWSL College Draft, in which she was the first overall pick of the Chicago Red Stars. She was the youngest member of the 2019 USA Women’s World Cup team that won the FIFA championship.” 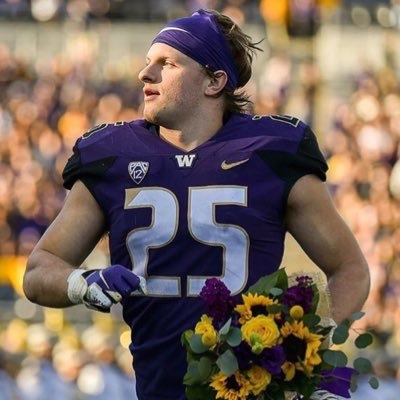 “Ben Burr-Kirven (Sacred Heart Prep football, 2011-14) — The stout and speedy linebacker-running back led the Gators on a remarkable 39-3 three-year run that included two Northern California titles and three straight CCS crowns, including an Open Division title his senior year. In 35 varsity games, he had 238 tackles to go with 15 sacks and six interceptions. Offensively he rushed for 1,613 yards and 32 touchdowns.

“Post prep: Was the 2018 Pac-12 Defensive Player of the Year at Washington and drafted in the fifth round that spring by the Seattle Seahawks. He has eight tackles this season heading into the playoffs.”

Top photo by Linda Hubbard (c) 2019: Tierna (far right), who grew up in Menlo Park, was welcomed back to Oak Knoll Elementary School, which she attended through 5th grade this past November. Photo of Ben from his Twitter feed.