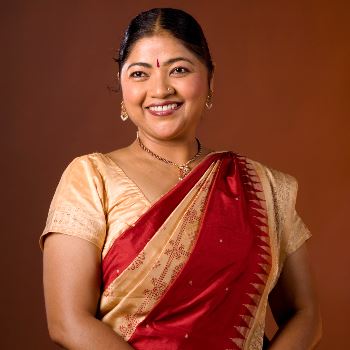 Have a try at Odissi dance, a classical art from Odisha, India on Monday, August 3 from 11:00 am to Noon. Guru Jyoti Rout will teach you a few steps and hand gestures and together we’ll try dancing a few lines from a traditional tale. Register online.

Agenda:
-Introduction of the dance, and its function and technique
-Trying out some steps, hand mudras and rhythm
-Exploring some lines of song or story, paired with the movements
-Question/answer

Odissi dance was originally developed in Orissa, India, as a form of worship in temples. Many dance pieces retell stories about Krishna and other deities through hand gestures and facial expressions. Odissi survived for over two thousand years as an oral tradition, but then fell into decline. In an effort to preserve Odissi, a group of dedicated dance gurus, scholars, and musicians set forth to reconstruct this form referencing classical dance texts, ancient dance sculptures, and the remaining dancers. In doing so, they refashioned Odissi into a classical Indian dance form with formalized movements and a standard repertoire to be presented on the stage. Distinct in style from other classical Indian dance forms, Odissi is known for its lyrical grace and charm, its rounded, fluid movements, and its sculpturesque poses.

Jyoti Rout’s interest in dance was kindled during childhood, when she witnessed a tribal dance by firelight in a remote mountain village. Years later, she enrolled at the Utkal Sangeet Mahavidylay, the Orissa University for music and dance. She immersed herself in dance for the next sixteen years, earning a master’s degree in Odissi, and went on to study vocal music and Chau Dance. Following a successful career as a dancer in Orissa, India, Jyoti came to the U.S. in 1993 and founded Jyoti Kala Mandir College of Indian Classical Arts, a dance and music school with locations in California and India.