Over 1,000 paper peace cranes on display in downtown Menlo Park 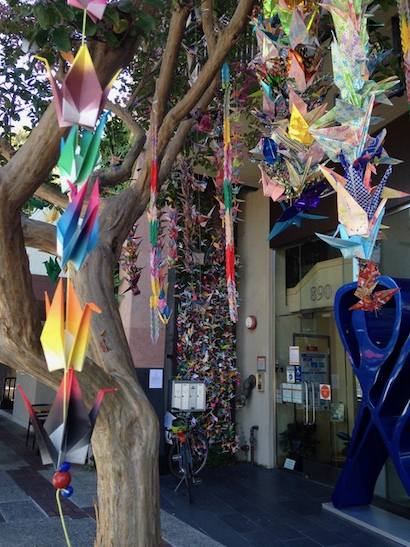 “Residents are encouraged to visit the public art installation of over 1,000 paper peace cranes made by volunteers on display through the end of August outside the Art Ventures Gallery (888 Santa Cruz Ave.), on a tall trellis near the gallery entrance, and on an adjacent small flowering “street tree” that displays colorful paper cranes in strands, including 350 small cranes in seven strands sent to the local sponsoring group, the Peninsula/Palo Alto Women’s Intl. League for Peace & Freedom (WILPF) from peace activists in Ehime, Japan.

“A short video about the installation is viewable on Facebook, and I’m in contact with the Japanese Consulate-General’s office in San Francisco, and the Japan Cultural and Information Center to make a gift of some of the cranes made by volunteers as well as strands of cranes given to us by peace activists in Ehime, Japan.

“We couldn’t have reached our goal of more than 1000 paper cranes (the traditional memorial) without individuals and families in Menlo Park and surrounding cities, and the young women volunteers organized by Jenny Rutherford, representing the Stanford Hills chapter of the National Charity League, who contributed hundreds of cranes, and the encouragement and cooperation of the Menlo Park Public Art non-profit CEO and Art Ventures Galley director Katharina Powers.

“Paper peace cranes continue to ‘fly in’ to grace the location with their colorful representation of wishes for a world at peace, without nuclear weapons.

Menlo Park Mayor Cecilia Taylor has issued an additional proclamation recognizing the 75th anniversary of the atomic bombings of Hiroshima and Nagasaki, Japan, designating the week of August 5 through August 12 as Menlo Park-Bizen Peace week.”