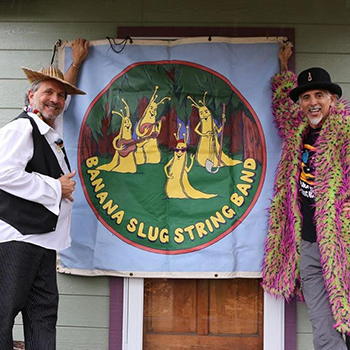 “Dirt Made My Lunch!” is the theme of this action-packed concert by the Banana Slug String Band that will take place on Tuesday, Aug. 18, from 2:00 to 2:45 pm. It will have you singing and moving as you learn how dirt is made and how it makes our food. We’ll be singing with “Mr. Dirt,” the puppet, doing the Roots, Stems, Leaves, Flowers, Fruits, and Seeds dance, and getting down with decomposition. Register online.

The Banana Slug String Band has been playing music for kids for over 30 years. They have played in 40 states, and five countries, for over two million people. Their music is used in school curricula and classes around the world. The Slugs have brought their musical messages to noted festivals such as the New Orleans Jazz and Heritage Festival, High Sierra Music Festival, and their home festival, Strawberry Music Festival, which they have played nearly 40 times!