Thousands of Joyblz spring from the creative mind of Joanne Nardone 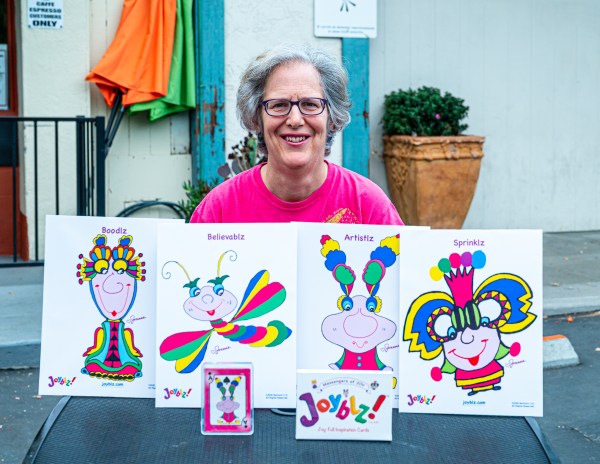 From the creative mind of Joanne Nardone, spring thousands of Joyblz — 2,500 and counting to be exact.

“They just pop out of my head,” says the Menlo Park resident who’s had a long and successful career in biotech. “I have no idea what they are going to look like. I think it’s some kind of channeling. The creative part of me wanted to get out in the world!”

Joanne makes up each of their names which all in end in “lz.” They are pronounced “joy-bulls,” rhymes with foibles.

“Each of these characters has a smile,” she says. “People tell me they bring them joy. You can call on them to get you to a happier and more joyful frequency.”

Recently Joanne put a website together featuring her Joyblz. You can meet them in person (so to speak) at Cafe Zoe on Menalto Ave. in Menlo Park where she is selling two products, an inspiration card deck along with a playing card deck.

Not surprisingly Joanne is known by many as JoyAnn. “I’m a little cheerleader,” she says, “and have always been a positive person.”