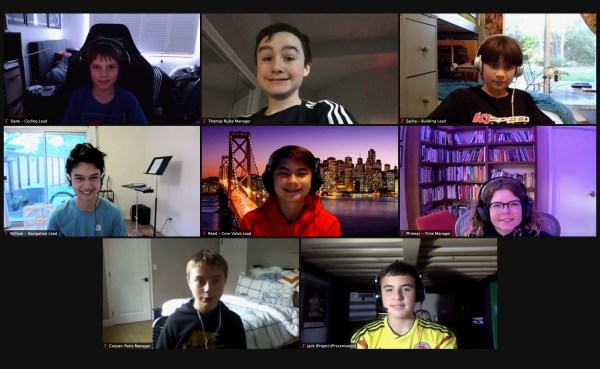 Six Hillview students along with one La Entrada student and another from Menlo School—not to mention Corbin the cat pictured with robot— are part of a Lego robotics team called the RobOtters (a nod to their roots as Oak Knoll Otters). This team has competed in the First Lego League tournament process for three years in a row, with many successes along the way.

Last week, they crushed the Northern California regional championships, coming in second overall out of 24 teams that had all led their respective, local tournaments several weeks ago. This is quite possibly the most competitive field in the country, given the prevalence of Silicon Valley-based teams.

The team designed, built, and programmed a robot out of Lego Technic parts. The robot performs challenges on a table on its own using sensors and motors.

The team was also tasked with coming up with an innovative solution regarding  this year’s problem statement regarding kids not getting enough physical exercise. Their solution: a fitness app called Exerobic aimed at kids that makes exercises fun, fast, easy, and gamified.

Crushed it; proud, but not surprised. Bravo RobOtters!