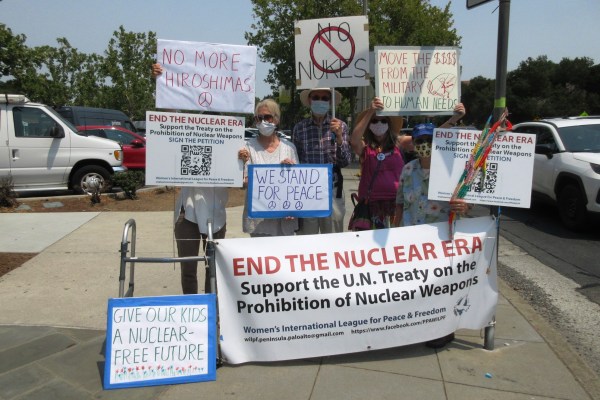 For the 75th anniversary of the U.S. bombings of Hiroshima and Nagasaki, our main community event last August was recruiting volunteers to make paper peace cranes for an installation outside Katharina Powers’ Art Ventures gallery on a two- story trellis and a flowering street tree. 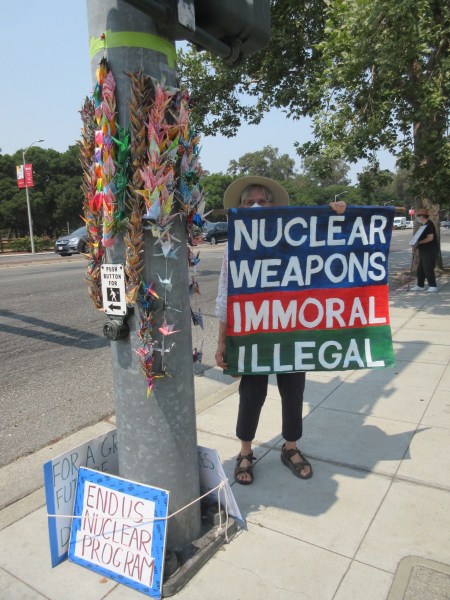 Thinking we might be able to have volunteers (using sample packets of 10 small paper cranes sent to the Women’s International League for Peace and Freedom (WILPF) by peace activists of Ehime, Japan as models) create the traditional 1000 paper cranes for display, we were delighted to be able to display 2080 cranes, which included some of the small Ehime cranes in garlands!  Kate hopes to recruit a sculptor to use the cranes as the foundation for a sculpture for this year’s sculpture fair at Menlo College, so I gave her a bin with half the cranes for use or inspiration.

I saved a second bin, most of the cranes in garlands/chains that Menlo Park residents made for the installation, so the hand-made cranes came out yesterday for the special noontime peace and justice vigil.

A small but spirited event commemorated the 76th anniversaries with participants from Menlo Park, with Los Altos/Los Altos Hills, Stanford, Woodside, and Palo Alto. Poles at the intersection of El Camino and Embarcadero—our traditional location for the vigils—were decorated with the cranes, and baskets with individual cranes were set out for participants and pedestrians. 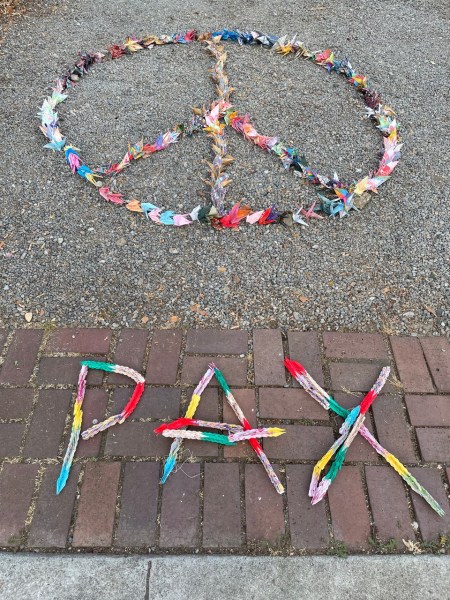 Our colorful protest signs urged nuclear disarmament and “moving the money” from military budgets for human needs.  People could photo the QR code on signs directing them to WILPF’s petition in support of the Treaty on the Prohibition of Nuclear Weapons, ratified by 122 nations (of course no nuclear powers), which entered into force internationally this past Jan. 22, and some passers-by signed the petition on clipboards.  We also had a petition in support of  Representative Eleanor Holmes Norton’s bill, introduced every year in Congress since 1994, for the abolition of nuclear weapons and for the establishment of a peace economy.

After coming home, my partner Becky and I made a peace sign out of some of the cranes outside our Menlo Park home. We also arranged some of the signs from the vigil in our front border, and put out a basket of the hand-made paper peace cranes, which several residents walking by enjoyed.

Our modest display will remain through August 9th, to remind our neighbors and friends of the urgent need to disarm the world of nuclear weapons and establish a peace economy that supports human needs, not weapons of mass destruction.