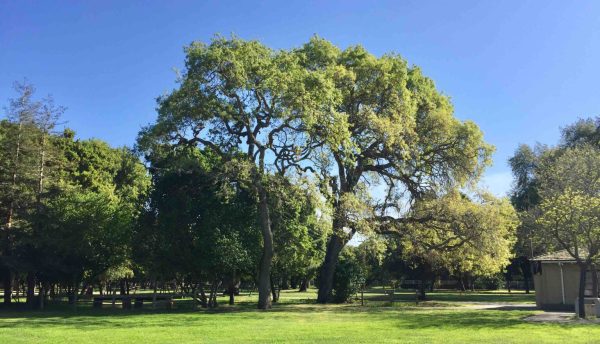 This meeting was an opportunity to discuss what services Flood Park could offer to meet today’s need for family outings and additional sports fields, while preserving playgrounds, picnic areas and the natural environment of Flood Park, the County’s second oldest park and home to a grove of Heritage oaks. An All-Abilities Playground, part of the proposed plan, will be the first one in the County.

During the next few months as the design of the park evolves, the County Parks Department will host several neighborhood “pop-up events” for further public input from March-September.  Two additional public workshops are planned for June and September.  In addition, a working group consisting of representatives from community organizations meets several times a month with the County’s team to offer input and discuss the plans as they develop.  Construction is expected to begin in the Fall of 2023.

This was the second public workshop held by the County. Approximately 100 people attended the Zoom meeting.  The last public meeting on this project was held in December 2015.

In each session, the County’s current plan was presented, comments were solicited, and in some instances, participants could vote on various activities for each by ranking them, which offered some guidance to the County and Design staffs before the final design stage. 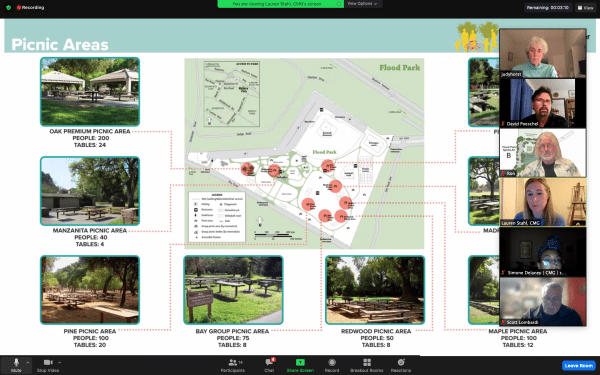 Many people in this breakout session said they hadn’t been aware until recently that the plan included removing many large old trees, especially oaks, primarily to build a second large soccer/lacrosse (multi-use) field in the heart of the woodland. There were many requests that these trees and the woodland area of the park be preserved and cared for.

A petition on the community-generated website, FloodPark.org, with this request has almost 3000 signatures.  Creators of the website want to balance the park with sports fields in the northern half and amenities such as the current picnic sites and the planned all-abilities playground among the trees in the southern woodland half.

The importance of the trees providing a peaceful retreat from urban congestion, animal habitats, and offsetting global warming was also discussed.  Suggested alternative sites for the second ballfield are on FloodPark.org.  Other discussions focused on ideas regarding the new playground, sports such as baseball, soccer, tennis, pickleball, basketball, a pump track, and on other amenities.

A planned All-Abilities playground will be the first in San Mateo County. Other considerations discussed for playgrounds were benches and seating, shade, sculpted hills and topography, plants and nature, art/murals and tables.  The main discussion, however, centered on improving sports fields currently in the park and how to fit additional sports areas into the park without impacting trees, wildlife, and those who picnic, walk or hike in the park,

Information about the park’s history and plans for its future is on FloodPark.org and the County Parks website.

My son was one when I first heard about revitalizing Flood Park in 2015. He’s now almost eight. At this rate he’ll never utilize the park as it’s intended. What a missed opportunity for another generation of MP children.

I know! It seems that a simple plan to maintain the park, including re-opening the baseball field, repair the tennis courts, maintain the small softball field would have gone a long way to meeting current goals. Add in maintenance of the BBQ facilities in the picnic areas and some much needed maintenance and stewardship within the woodland area, and we would be nearly reached the goal of restoring Flood Park. We certainly would be preserving the nature of the park and saving the heart of the woodland from County’s current plans to destroy it.

Then, with an beautiful and maintained park, one could see that something special could be done to retrofit the adobe administration building and add soccer to the sports field side of the park, as a larger multi-purpose/multi-use sport field that could accommodate all sorts of field sports: Baseball, soccer, lacrosse, even lawn bocce ball.

This park has been let go (care wise) for so long that we just assume that is the norm. With County planning on putting in $16M+, I hope they also commit to a sustainable and funded maintenance and woodland stewardship program to keep it healthy and fully operational for many many future years.

Isn’t there an all abilities playground, Magical Bridges, in Redwood City? How would this be the first one in the county. I agree with many of the people at the meeting we will leave it keeping the trees especially old heritage oak trees is extremely important.

This is the first all-abilities park that the County will build. Redwood City’s park is not part of the County’s park system. It was developed by the city. So in a way, you and the article are both correct. Thanks for your comments.

Just wanted to point out that FloodPark.org/news-event/news-feb-public-mtg/ has a recap of the Feb 2nd meeting and, as more information from the meeting is available, that webpage will be updated.

I want to thank the many, many people who spoke so earnestly about the importance of keeping and caring for the park’s historic trees. Special thanks to the representatives of the local chapters of the Sierra Club, Audubon Society, the CA Oaks Coalition, other nature advocacy organizations, and individuals who spoke and/or wrote letters to the SM Parks Dept. and Supervisors. Also, thank you to the 3000 people who signed the petition on the community website FloodPark.org. Suggested alternative locations for the second ballfield currently planned for the heart of the woodland are on this website. We can balance sports and woodland areas of the park. Updates, actions, and future events will be on FloodPark.org. where you can join email list for notices. Information and a place to sign up for updates is also on the Parks Department website: parks.smcgov.org. These websites are separate and both are important.

I am a Menlo Park resident and a member of the SMC Parks Dept.’s newly-created “Working Group,” a small-group representing local community groups. The process has taken since 2015, 6 years, for important reasons and we are all glad to be finally in the design phase. The design firm, CMG Landscape Architecture, is excellent. Various studies must be done and there will be additional public input meetings. Construction is expected to begin in 2024. The Plan 2020 was first presented to the public in a zoom meeting on 10/13/20. Continued public interest and input is desired and important. Updates about public input events, and space for continual public input are on the community website: FloodPark.org and the SM County Parks website: parks.smcgov.org.

Yes, the wonderful all-abilities playgrounds at Nealon Park in Menlo Park and Red Morton Park in Redwood City are similar to The Magical Bridge playground in Palo Alto. The popularity of these playgrounds is the inspiration for the plan to build one in Flood Park which is a county park. It would be great to build it in Phase I of construction instead of Phase II. Some other local parks have added few all-abilities swings and other structures and there is a small such playground at CuriOdyssey within Coyote Park.