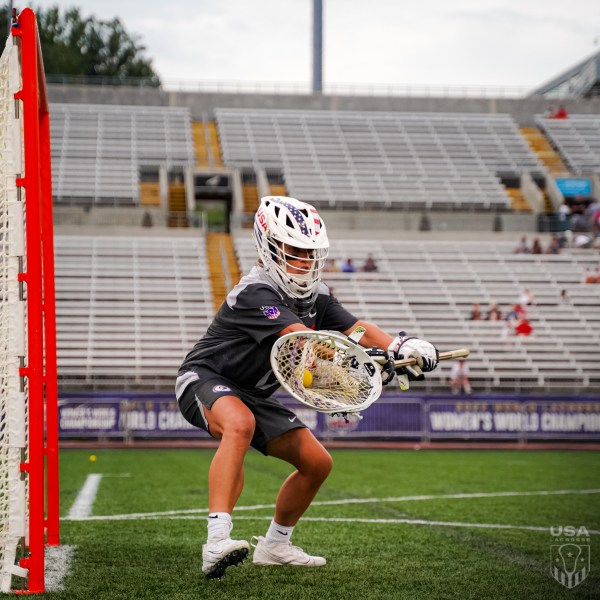 For Hogan, it was the first time playing in a senior world championship; she made the USWNT in 2012 and nearly made the final 18-member championship roster twice before. 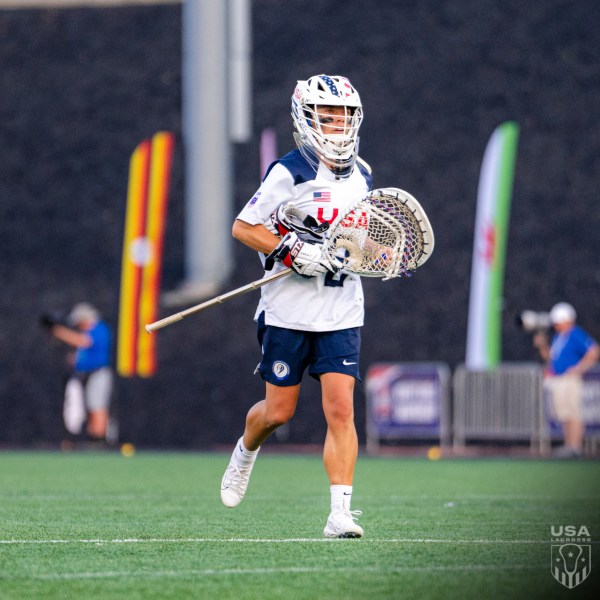 Watch the hightlights
Sacred Heart Schools: First off, congratulations! We’re excited to speak with you today. Before we get into the summer championship, walk us through your lacrosse career, from when you first began to play the sport, to being a sought-after college recruit, to playing professionally.
Liz Hogan: I think my lacrosse career has been pretty unique in how it all started. When I was in second grade, my twin sister and I both wanted to play boys’ lacrosse… and girls’ lacrosse wasn’t even an option [at the time]. So, it was like, “We want to play with all of our friends. All our friends are boys. All the boys are playing boys lacrosse. Let’s do it.”I played lacrosse throughout high school… and went on to play at Syracuse University, where I had some amazing coaches, which I think really shaped the next 15 years of my career. I was fortunate enough to try out for the U.S. team several times, and pro lacrosse teams throughout. And here I am, 33, looking back on it and it just feels like a whirlwind. It’s been 20 years of hard work… but something that I’ll never forget.

SHS: You’ve been aiming for this championship since trying out for the 2009 squad and being on the training roster of the 2013 and 2017 squads. Talk about the challenges you faced and how you persevered.

Hogan: I think the biggest challenge about being on this national team is that it has taken so long. My first tryout was in 2008 and I didn’t make it… After that, I was on the training team, which was really cool. You’re getting to play against some of the best people in the world and train with some of the best people in the world. But to be the last person cut always gets at you, right? You’re the third goalie out of the two they can take.

But [it’s also about] believing in yourself that one day you’re going to make it. It’s been a real blessing to play with some amazing people for these 12 years, but it’s also brought a lot of perseverance out of me. It’s been good and I wouldn’t have it any other way.

SHS: At Sacred Heart, we teach our students to “fail forward,” learn from an experience, and try again, so there’s no longer a fear of failure. Does that sentiment resonate with you?

Hogan: I like to tell players at the Prep [and] the middle school, in any sport you play, you’re going to fail. But if you’re going to fail that means later you can succeed, are you going to take [the chance]? Almost every kid, when they look at it like that, is going to say, “Yeah, failing’s okay. As long as I learn from it, I’m going to get better and then that’ll all be worth it.” I think failing’s such a huge, important part to every aspect of life, and to give kids permission to fail, I think, is just so huge as a coach and as a teacher.

SHS: Take us to that moment when you found out you were named to the roster, and furthermore, as the starting goalie.

After we’d gone through warmups, I was like, I’ve got to go call Jenny [Levy] back.” She says, “Well, you’re my last person, and I was a little nervous because you didn’t pick up… Just want to let you know you made it.” And it’s just that sigh of relief: “Okay, we did it. We’re here. Now I’ve got to go back to practice and act normal.”

SHS: That must have been an incredible moment. Tell us about your experience this summer, what was different about playing at this level?

Hogan: I think there’s a lot of things different about playing at this level. The first obviously being that you’re playing against different countries [so] there’s different perspectives on how to play the game. To me, that was the coolest part—you’re in the dorms and you have Japan below you, New Zealand below you, and you go into the dining hall and you’re talking to someone from China—you get to have conversations with people that you wouldn’t normally have conversations with, all because you share the same love of the sport.

SHS: What did it feel like winning the goal medal?

Hogan: It was pretty wild. I ended up playing that whole game, almost. I got a yellow card in the last two minutes of the game. So, while in my dreams I always pictured being on the field when that final horn rang, I was actually on the sidelines, which is just on par for the course for my journey, right? But to be able to run out to your teammates and celebrate and know that this is it, you’re on top of the world—was incredible.

SHS: How has this experience given you a platform to grow the game, especially via coaching?

Hogan: I think it’s really cool to play professionally and have that platform to share [your experience] with kids… To not only play it and inspire kids all over the world, but to directly influence the kids coming through Sacred Heart has been a blessing.

I want to show [the kids] that I’m your everyday kind of person, and if you put the work in, you can have just as much success too. I like to balance that, “Yes, I play on the national team and I’m here with you guys, but also I’m just like you. I’m at the school all day and I put my own work in too so I can get to where I am—nothing can stop you if you really want something.”

SHS: As you trained to be on the U.S. National Team, what did a day in your life look like?

Hogan: My life’s pretty crazy. Every day would start off with me getting to work at SHS around 6:30 a.m. so I could work out. Some days it’s lifting, some days it’s sprinting. I try to get that in so that I can get ready for the day. Because at 8:30 a.m., I have homeroom as an advisor. [Then] I have about four classes a day, and snuck in between I have my dean’s job as an associate, working with Wendy Kridel [SHS dean of students grades 4-6 and women’s lacrosse director] and Kirt Peterson [SHS dean of students grades 7-8].

After that, there was either a middle school sport or a high school sport. Some days [were] 12 hours, and then just getting home and sleeping. It was kind of just put your eye on the prize, go through it, and grind. Probably wasn’t the healthiest thing, but looking back, when you have a dream and you have a defined end line, you’ve got to put everything in. It was a little bit overwhelming, but if you just took it day-by-day and hour-by-hour, it worked. Yeah, it was crazy.

SHS: What was your favorite moment on the field this summer?

Hogan: I think my favorite moment of all time was Australia—there was a torrential downpour. I don’t think I’ve played with it raining that hard since maybe I was a kid. My shorts were falling off, my jersey’s soaked, my gloves… I can barely feel my stick, and it’s just so warm. But everyone’s like, “This is the coolest thing ever.” I literally felt like I was five- or six-years-old all over again. It truly reminded us that you’re playing a sport because you love the game. No more, no less. It’s supposed to be fun. And in that moment, everyone on the field, their smiles were just so wide, even though you could barely see the middle of the field, right? I can’t really see what’s going on at the other end, but I know we’re all having fun.

SHS: What’s been your favorite lacrosse memory since you first began playing?

Hogan: Looking back, my all-time favorite lacrosse memory [was when] my sister and I would play first to 10. Either she scores 10 goals, or I made 10 saves. I’m pretty sure my mom hated it because no one ever came back happy. It was either I was stoked, and my sister was fuming mad, or I was just beside myself, so angry. Mom’s like, “This is the worst.” I’m like, “That’s where we [forged] our competitiveness and had a lot of fun up until that last goal.”

SHS: Who have been your biggest supporters and best mentors coming up in the sport?

Hogan: That’s a great question. I don’t think I’d be here today without a lot of supporters and mentors. The first person that comes to mind, I had a goalie coach at Syracuse, Maggie Koch. She was the officiant at my wedding, that’s how close she was to me. She was the first one who taught me how to play the position, but also inspired me, [and helped me realize what] I could do in the future.

And I wouldn’t be here without my parents putting me through all the stuff as a kid. I see it now, the parents driving around to all the tournaments, all the club practices. I can’t thank them enough. My sister for shooting on me—I think that went a long way.

And then just all my teammates from over the years, right? Not everyone was a starter, not everyone was in love with it as much, but everyone helped shape and mold me into who I am. Every experience mattered, coming this far.

Hogan: I think my mom would really like me to stick it out and play for the Olympics, but I’m pretty sure my playing career is over with for now. I really enjoyed everything, but it’s the first time in my career that I kind of felt like, “Okay, this is it,” and I’m really at peace with it. I’m glad it lasted as long as it did, but I’m at a point where I’m like, “Okay, that was a fun ride. Time for the next chapter.”