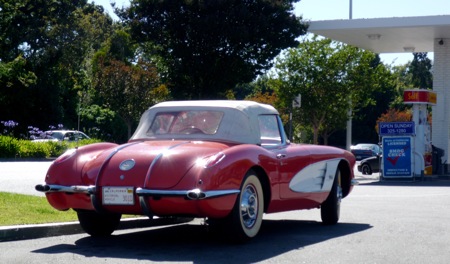 To some people, Corvettes of a certain vintage – 1950s and 60s – may evoke fun in the sun Southern California variety. But they’ve always been a part of the Menlo scene, thanks to strong local Chevy dealerships (now absent). The 1958 (through 1960) Corvette roadster was, according to Wikipedia, “the flashiest ever.” Today this five decade old gem was spotted at the Shell station at the corner of El Camino and Glenwood, looking much in its prime.