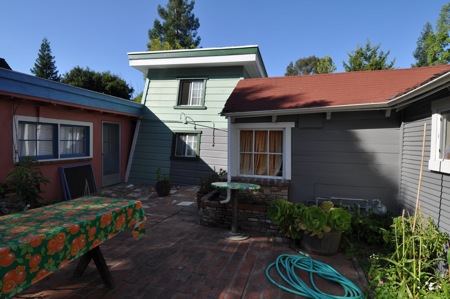 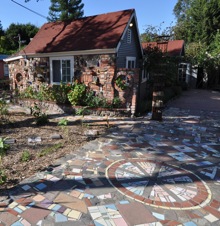 There’s a sliver of what’s called variably University Park or Menlo Heights directly behind Oak Knoll School and just north of Sand Hill Road which houses a cluster of four cottages, three of which are particularly fanciful. According to the current owner, the cottages present both history – and mystery: “The original house on the property was on the Stanford campus and was used by the horse caretakers. It was built in the 1890s, has square nails, and got moved  here when the golf course was built. The water tower (top photo) is the same construction, and we assume provided water for the local area.

“Mr. Walker, a mason originally from Scotland, lived here for 50 years or so. He did all the crazy masonry, built the cottage closest to the street (bottom photo) and the little studio next to the water tower. My neighbor said he and his wife were really tiny and that’s why the house has such low counters and door handles.  I’ve  heard that he buried money in the yard, so I’ve looked around for buried treasure but all I ever find are old bottles that he buried.  We also found an urn with someone’s ashes in it;  it says “pear” on the outside with the date 1879.  We have no idea whose it is, but we’ve certainly pondered over it.”