The Big Easy makes its way to Fremont Park 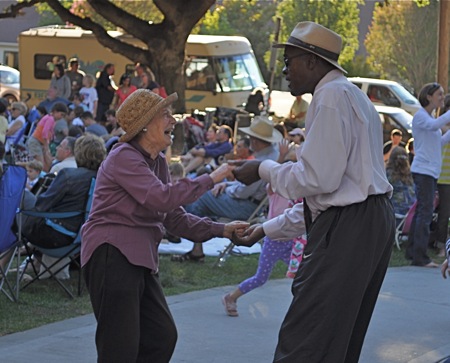 The spirit of New Orleans filled Fremont Park this evening thanks to the sounds of Chelle! and Friends, a band that promises to commemorate the music of Mardi Gras and celebrate the city’s Creole people and their music. Anyone who has visited the Katrina-devasted city in the past year or so, can attest to its music aliveness whether on display in its jazz roots or the Cajun sounds of Bruce Daigrepont. Music is  everywhere in New Orleans – and it makes people get up and dance. Trivia footnote: According to Urban Dictionary, New Orleans residents hate hearing people say “N’awlins” as well as “New Or-Leans,” preferring “New Awlins.” Maybe that’s similar to the feelings of long time Menlo residents who talk about the place 30 miles north as the “City” and never, ever “Frisco.”