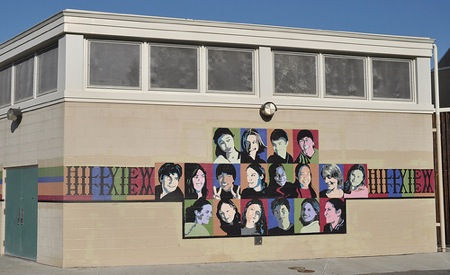 A whole lot of years ago, this contributor began kindergarten at Hillview School (yes, that’s how many years ago – during the era that Hillview, Oak Knoll and Encinal were all K-8).

One of the few “growing up in Menlo” things she has is her Block H sweater with two stars. Because her parents (who  were the main keepers of that sweater for so long) lived just a block away on Hillview Drive through 2001, she’s always made occasional visits to the campus, more so since moving back to Menlo herself in 1990. She’s seen the buildings get a bit long-in-the-tooth and witnessed the renaissance that occurred a bit over 15 years ago when colorful murals began sprouting up on the campus buildings.

Today – the day before official start of school – was “Arena Check-In,” mandatory for all incoming Hillview students and a parent. They were required to present themselves – time synced by alphabetical last name – and bring completed and signed district forms as well as PE uniform and/or band shirt order forms. The Hillview student was instructed to “dress for their school picture.”

And so there they were this morning,  a parade of well scrubbed young and soon-to-be teens on their way to the multi-purpose room (how many assemblies had she attended during her nine years on campus?). Some of them may one day appear in a new mural, like the one now facing Santa Cruz Avenue that was created based on digitalized photos of past students and painted in a mirror image.