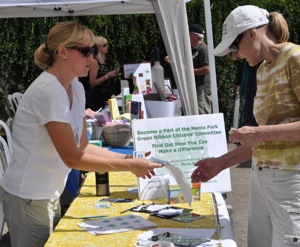 The group is now focusing on further community outreach, such as being present yesterday at the Roger Reynolds Nursery anniversary celebration where representatives were handing out a checklist that identifies actions that individuals can do at home or work to reduce carbon emissions. (The list is also available for download from the group’s website.) To accomplish their mission they’ve organized seven actions teams in these areas: green building, business, communities of faith, neighborhood, school, transportation and education. The group invites local residents to join them: “We believe we can make a difference through local action.”