Showing off its private status 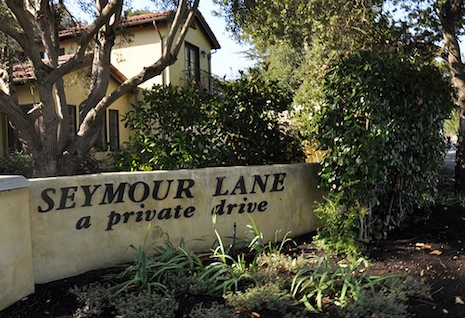 Seymour Lane, a cul-de-sac off Santa Cruz Avenue near Hillview School,  has  displayed its “private lane” status since the first homes were built between 1949 and 1952, first with a wooden sign and more recently with a somewhat fancier designation. A “private street,” according to Menlo Park code 16.04.635 is “any street, avenue, etc., not accepted by the City Council for maintenance or public use,” excluding easements or private driveways that provide access only to panhandle lots. Supported by homeowners’ association, most of Menlo’s private streets go unnoticed by other residents, unless they make a statement about their status.  Such was the case with private Morgan Lane which garnered attention  earlier this summer when a “No Trespassing” sign appeared on its boundary.