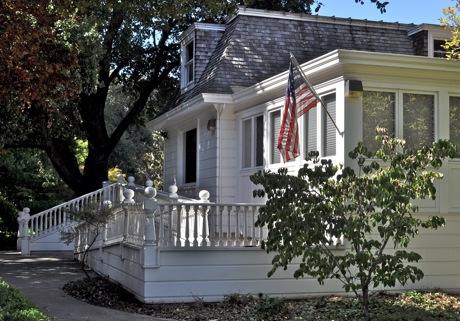 Hundreds of people pass by the big white house on the corner of Laurel and Ravenswood each day without knowing it’s the oldest existing structure in Menlo Park.  Now home to the Junior League of Palo Alto/Mid-Peninsula, the Gatehouse – or more formerly the Barron-Latham-Hopkins Gate Lodge – is also the last surviving gatehouse in the state of California. The Junior League’s website has an excellent write up on its history, excerpted below.

“The Gatehouse was built in 1864 by William Eustace Barron who was a leading capitalist during California’s formative days. It was the entrance to a 280 acre estate that extended from the Caltrain railroad tracks to Middlefield Road and from Ravenswood Avenue to the San Francisquito Creek. There were several outbuildings on the estate that supported a 40 room mansion.

“Milton Slocum Latham purchased the estate in 1871 for $75,000 and named it Thurlow Lodge. Latham turned the property into the most elaborate estate in California. He spent most of the Civil War in France and brought back many fine outdoor fountains that he placed around the property, including the one that still stands near the Gatehouse. Latham was an important Californian. He served as a U.S. Representative from 1853 to 1855. In 1859 he was elected Governor of California but only served 5 days because California Senator David Broderick was killed and Latham was chosen to take his place. It is also noteworthy that Latham was a southern Democrat and, prior to the Civil War, advocated California secede from the Union and form an independent Pacific Republic. Latham lost his fortune in the Depression of 1875. He sold the estate in 1883 and moved to New York.

“Mark Hopkins’ widow purchased the estate and renamed it Sherwood Hall. She had all of the buildings painted from white to green with red trim after seeing a similar look on a trip to Europe. The new colors did not suit the property but it was too costly to have everything repainted. When she remarried she deeded the property to her adopted son, Timothy Hopkins, as a wedding gift in 1888.