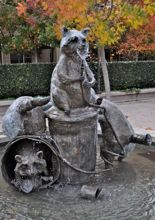 Hundreds of people get on and off at the Caltrain station in Menlo Park every day, but we’re guessing few notice the bronze raccoon fountain just 100 feet or so to the west. “Bandits” was unveiled in 2002 as part of a new plaza along Merrill St. It’s the work sculptor Joffa Kerr, an Oklahoma native who lives in Wyoming with husband William and uses a small log cabin on the property as her studio. According to one gallery representing her work, “Unlike the dead serious approach of anatomists and animal portraitists, Kerr`s sincere appreciation of the animal world is tempered by a playful sense of humor often reflected in her sculptures` titles. She insists on working with animals that are not caged so she can capture the interaction between the animal and the environment.”